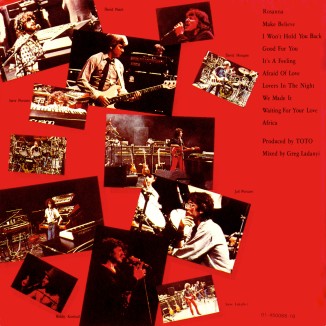 With the release of Toto IV on April 8, 1982, the band quickly turned their occasional radio presence into a total domination of the waves. Unfortunately, Toto’s previous efforts couldn’t bring them to the spotlight, despite the amount of hard work and professionalism they invested. Toto IV was truly their last chance of hopping on the train and they couldn’t have done it better. Toto rose to the challenge and with an immense doze of enthusiasm and impeccable songwriting craft, they produced their most successful and visionary album.

After just one listen of the album, you can easily feel the unique aura and distinguishable details of the record. Toto worked harder on refining the melodies and harmonies – the tempo is slowed down, matching the quite bouncy beats of the songs. Guitars, trumpets, saxophones and trombones are having the most ear-pleasing dance. The lyrics are quite simple and innocent, dedicated to the themes of love, heartbreak and hope. The vocals of Bobby Kimball are much improved and strengthened, backed up by having other group members singing. Timothy B. Schmit was also on board as backing vocals on “I Won’t Hold You Back”, “Good For You”, and “Africa”.

Undoubtedly, “Rosanna” and “Africa” are the absolute career-peak compositions of David Paich and the ultimate hit singles of Toto IV. Not to mention that those two songs are also some of the most notable symbols of the 80s pop/rock scene. The golden single “Rosanna” impresses with its dreamy lyrics and playful beats. “Africa” on the other hand, demonstrates a fantastic scope of elements, including refined solo keyboards from Steve Porcaro, graceful yet high-reaching vocals of Bobby Kimball and prominent bass rhythms by David Hungate who is dearly missed on all the following Toto albums. “I Won’t Hold You Back” is yet another beautiful soft rock knockout, full of intense emotions and feelings. I often referred to it as one of the saddest songs ever composed. “Make Believe” is surprisingly uplifting and features excellent saxophone blends.

Toto IV, however, is so much more than “Rosanna” and “Africa”. The record is extremely polished, professional-sounding and full of timeless classics. Furthermore, it’s also both the group’s triumphant recovery and their absolute peak. The industry and the public acknowledged the brilliance of this album with 5 Grammy Awards, including Best Album and Record of the Year (Rosanna). Nothing more to say – a true iconic record you NEED to have!

I Won’t Hold Back

“Toto IV” official Wikipedia webpage: https://en.wikipedia.org/wiki/Toto_IV
P.S. I don’t own any audio or visual material used in this publication. All the rights and credits go to the owners and/publishers.
Cheers~