I had a feeling that 2017 was gonna kick some serious ass but I had zero idea that it will be THAT good of a rock&roll year. Just when I thought that 2017 can’t get any better, Mr. Big dropped this awesomeness, titled “Defying Gravity” and once again I’m left speechless. Frontiers Music are on a roll this year – big thank you for keeping great music alive and supporting artists who deserve it.

So many beautiful things are happening in this album and I don’t even know where to start. First of all, remember that groundbreaking 1988 self-titled debut album with the torn shoes and the top hat? If you remember and you love that release, then you will most certainly be thrilled to know that their ninth studio album, “Defying Gravity” features those exact four original members Eric Martin (vocals), Billy Sheehan (bass), Pat Torpey (drums, with the help of Matt Starr due to his unfortunate Parkinson disease) and Paul Gilbert (guitar), along with the same producer, Kevin Elson. So far so good, right? It’s been almost 30 years since the release of that debut album but the guys and their talented producer did manage to recover the classic Mr. Big sound from the late ‘80s and early ‘90s that made them so popular and critically-acclaimed.

“It was great to get back in the studio with our original producer, Kevin Elson,” says guitarist Paul Gilbert. “Kevin recorded all of our original classic albums from the ‘80s and ‘90s, and we immediately felt that magic chemistry with him on DEFYING GRAVITY. We basically played live in the studio. Over the years, we’ve all had a chance to experiment with every recording technique possible, but it’s still always the best just to play together as a band. Most of my guitar solos were tracked live with the band. I’ve worked hard on my improvisation in the last few years, and it really paid off on this record…both melodically, and on the face-melting stuff.” 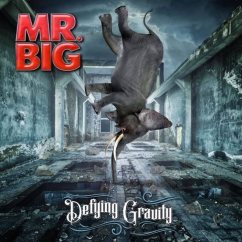 Impressively, Mr. Big recorded this album in a matter of six days. Your jaw probably just dropped, just like mine when I first read that so hurry now and pick it up from the floor. Imagine the determination, creativity and talent you gotta possess in order to come up with 11 smashing rock hits in just six days! If that doesn’t grab your attention then I guess it’s time for you to just get the album and listen carefully. The genuine, melodic rock atmosphere of “Defying Gravity” will conquer you right from the very first track. The guys aren’t joking around, though. A lot of thought has been put into this album and you can clearly spot it once you crank it up. Perfect production, wrapped up around quality songwriting skills and don’t you even get me started on those vocals and bass lines.

“1992” is the absolute winner and the track that stood out to me the most (no, not because I was born in 1992 and it’s the most awesome year in history). In terms of melody, the track has that inviting, laid-back old-school rock&roll vibe thanks to which you are simply unable to click the “stop” button. When they released it on YouTube, I played just this one song for the entire day. The lyrics are what you should pay attention to. “1992” is kind of a humorous intake on their rise and fall back in the day with hits like “To Be With You”. What a brilliant approach. Its charming honesty can’t but leave a smile on your face. The opening track, “Open Your Eyes” is something to watch out for – the song has killing riffs and bluesy vibes. It has a bit of a Zeppelin feel into it (but just a little). Now is the moment to point out that vocalist Eric Martin brough his A game on this album and this song is only highlighting what I’m saying. He sounds as good as he did back in 1988, if not even better! The title track is undoubtedly the catchiest song among the playlist. It has a fine modern touch which we don’t really get to hear on radios these days. The album offers variety, that’s for sure. The acoustic bliss, “Damn I’m Inlove Again” is as joyful as a chilly fall evening around a beach fire. “Mean to Me” has a very bizarre but unique fast-paced riff which makes this song an unique experience for the listeners. “Forever and Back” is your mesmerizing classic Mr. Big ballad without which “Defying Gravity” would’ve been a little bit emptier, at least to me.

Every other track on “Defying Gravity” is the ultimate earworm and I’m saying that in the most positive way you can imagine. Easy to sing along with, a little bit of fire, a little bit of ice, tons of good mood and excellent lyrical strength. What a solid comeback. Get it now in case you haven’t.

Everybody Needs a Little Trouble