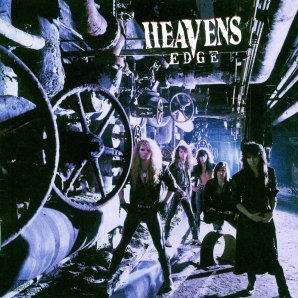 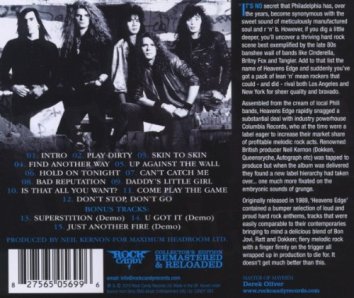 Philadelphia glam rockers, Heaven’s Edge, had all the right skills, attitude and qualities to hit it big in the late ‘80s and early ‘90s. Unfortunately, the train they took turned out to be a very late one. Releasing a hard rock album right before the grunge wave flooded the music scene, didn’t help them at all. Well-polished AOR, catchy hooks, leather pants and long hair were no longer the characteristics major record companies were looking for in a band. Heaven’s Edge were quickly dropped from their label, without getting the stage they were truly made for. Despite all, their self-titled debut still remains a solid effort, filled with exciting rockers, seductive live recordings and a top-notch ballad that deserve nothing but to be cranked up all night long!

“Heaven’s Edge” is packed up with sexy, fun and highly captivating tunes, such as “Play Dirty”, “Can’t Catch Me” and the MTV favorite “Skin to Skin”. Vocalist Mark Evans and lead guitarist Reggie Wu are turning every tune into a heavenly kingdom where melodic rock is the only religion. “Find Another Way” can effortlessly make you fall in love with it at the very first listen. This first-class AOR gem should’ve gotten all the radio attention back in the day. I rarely find such a good balance between simplicity, thrill, atmospheric vocals and kick-ass guitars. “Bad Reputation” is yet another remarkably entertaining moment from the record. The hidden treasure is the power ballad “Hold On To Tonight”. If it was given the chance it deserved, it could’ve easily wiped out any ballad that stood on its way the late ‘80s and early ‘90s (even the biggest hits).

“Heaven’s Edge” is an album full of hits that should’ve made history. What’s in the past is in the past, though – it’s a band and an album that are truly worth discovering! If you lift your spirits by playing melodic rock as loud as possible (like me), this is your thing!

Hold On To Tonight

…or listen to the entire album here:

Intro
Play Dirty
Skin to Skin
Find Another Way
Up Against the Wall
Hold on Tonight
Can’t Catch Me
Bad Reputation
Daddys Little Girl
Is That All You Want?
Come Play the Game
Don’t Stop, Don’t Go

P.S. I don’t own any audio or visual material used in this publication. All the rights and credits go to the owners and/publishers.

The publication expresses my personal opinion and in no way is trying to make a generalized statement. Please be kind and considerate when you read and/or comment.