Discovering Hardline years ago was expected, given the fact that hard rock is exactly my kind of thing. However, falling in love with their unique sound and charismatic appeal that differentiated them among the endless river of hard rock bands that came out in the late ’80s/early ’90s, was also inevitable; I mean, don’t get me wrong but who wouldn’t? 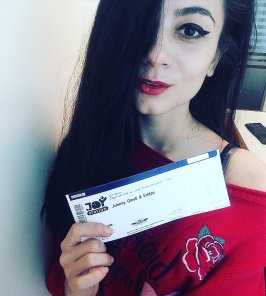 For a long time, classics like “Double Eclipse” and more recent releases like “Danger Zone” and “Human Nature” have been an inseparable part of my life. You know me – once a fan, always a fan. My unconditional support for the band can largely be contributed to the talented frontman – Mr. Johnny Gioeli who mesmerized me, ever since I heard him sing for the very first time on that timeless debut album. Imagine how my little fan heart felt the moment I found out that he was going to perform in my home country of Bulgaria at the end of March, 2018. The excitement is overwhelming and I just cannot wait to see how he makes magic on that stage. I’m dying to sing along with him on hard rock anthems like “Takin’ Me Down”, “Hot Cherie”, “Rhythm from a Red Car” or “Danger Zone” and “Where Will We Go From Here”. It’s going to be one of the highlights of the season and definitely a concert I will remember forever. (Concert review will come immediately after the event, so stay tuned)

I think dedicated fans from Bulgaria are expected to come and I am certain they will. What I truly hope to see is young rock enthusiasts like myself, eager to discover for the very first time the unbelievable talent of Johnny and his music! I sincerely hope to see many new faces and spread the word, because believe me, it’s totally worth it!

(… a song I truly hope to experience live; If he decides to sing it, I will just go on that stage and dance my ass off, I don’t care!)

It’s not just HARDLINE where Johnny flourished as a notable vocalist and won the hearts of many. Alongside guitarist Axel Rudi Pell, Johnny has been conquering the stages since the late ’90s. Those two are a match made in heaven and a duo worth appreciating. I cannot wait to enjoy their music as well, presented by him on the Bulgarian stage.

One more exciting addition to the event would be the participation of Bulgarian rock band ERIDAN. I gotta say, I am not that familiar with them, however I can’t but be thrilled about the collaboration and the opportunity presented here. Since I was living abroad for so long, diving into the local rock scene and unearthing beautiful rock bands like ERIDAN can’t but be something to look forward to.

For my many international readers, I think it would be quite interesting to discover a new foreign rock band that is equally deserving.

Here are a few videos, where you can get a glimpse of how magic is being made…

…and of course this incredible performance.

I am just as thrilled to hear him sing the evergreen hits of Rainbow and Deep Purple. That’s going to entirely shatter the ground beneath my feet because I’m a huge fan and seeing someone so vocally power doing justice to these classics will be a life-changing moment for me and the fans. 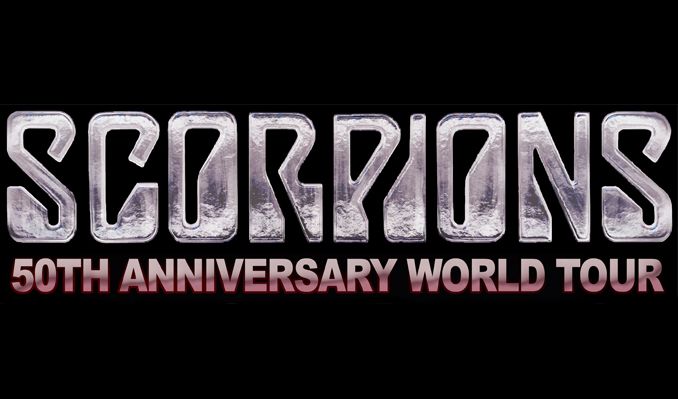 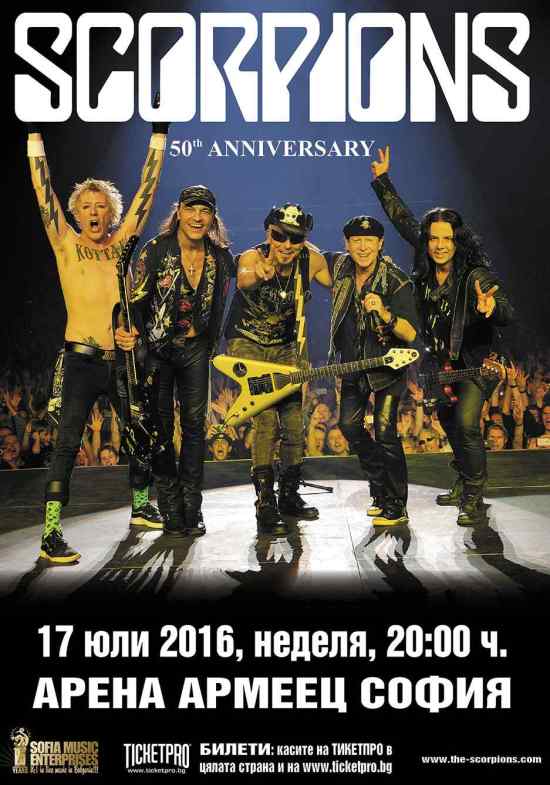 What a life, what a career… I cannot believe those guys have been rocking for 50 years! In honor of their 50th anniversary, Scorpions went on a grandiose one of a kind world tour that begun last year and will end this December. They performed all over Asia, South America, North America and of course, Europe. On the 17th of July, it was time for Bulgaria to celebrate the long and productive career of those rock legends and welcome them on the stage of Arena Armeets in the capital – Sofia. The news about them including Bulgaria in their world tour came as no surprise, as the band is quite fond of the country and Bulgarian people have a very special relationship with Scorpions. Fun fact, Scorpions is actually one of the bands drawing the hugest crowds at their concerts among all the other rock bands that come to perform in Bulgaria. This time, around 15,000 people came to listen and rock with their favorite band, for probably the last time.

I was extremely excited and have been looking forward to this event since the day I bought my ticket in March. The anticipation and the idea of seeing them perform live for the first time in my life, kept me alive for my entire spring semester abroad – I simply couldn’t wait to come back to my home country and attend their concert. Finally, the day came! The whole experience took me a couple of days since I don’t live in the capital, however it was totally worth it! I was so happy to see people of all ages and all generations coming together, all wearing rock band T-shirts, smiling and ready to rock! This is the kind of atmosphere I really thrive in! Anyhow, huge kudos to the team who organized the event and made sure that given the current events, the security was at its finest and we could all enjoy ourselves, without worrying. I was very impressed by how easy and fast we were able to safely get inside and find our seats and by how smooth and distressful, 15 000 people managed to get out of the arena when the concert finished! There were no unpleasant scenes or people who wanted to darken the bright moment. Once again, it was all thought of brilliantly.

Now, let’s talk about the concert itself and the great Scorpions! With no “warm up” bands, no further dues and not much talk, Scorpions came out on the stage and rocked as hard as ever, right from the beginning with “Going Out With a Bang”. Needless to say, the crowd went wild! Klaus Meine, the frontman, then greeted the fans in Bulgarian. He said “Добър вечер, София! Как сте?“, which means “Good evening, Sofia! How are you?” Of course, the crowd went absolutely wild after this respectful gesture of the band! After that, we went on memory lane with Scorpions and listened to the superb performance of some of their greatest hits from the 70s and 80s, such as “Make it Real” and “The Zoo”. I was mostly touched by their gentle, yet empowering performance of “Send Me an Angel”. I felt like at that point, the soul of each and every person of the audience was filled with so much warmth, hope and happiness that the whole arena became one huge bright star, shining on that dark night sky. One more thing I would like to point out was the fantastic, out-of-this-world drum playing of Mikkey Dee from Motorhead. His violent drum beats, which by the way made the whole arena shake as if there was a crazy earthquake, left us completely speechless. I am glad there were so many young people and even children among the audience so that they could truly feel and appreciate the precision and skills needed to become a drummer. Not many people actually realize or have the chance to hear a storm like the one we witnessed yesterday, in the face of Mikkey! After that, the band went on with “Blackout”, “No One Like You” and “Big City Nights”.

The concert ended with the timeless classics “Still Loving You” and “Rock You Like a Hurricane”, which was actually quite predictable and we were totally ready for the splash! I honestly had the time of my life! I do hope I have the chance to see them again! Their spirit, attitude and dedication inspired me and I can only wish to achieve as much as they did and be as awesome as they are at that age! Thank you, Scorpions!

Check out some photos from the event! 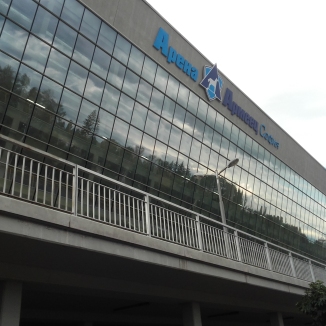 2. Me (because of course I would put on a Def Leppard T-shirt, regardless of the band whose concert I was about to see) 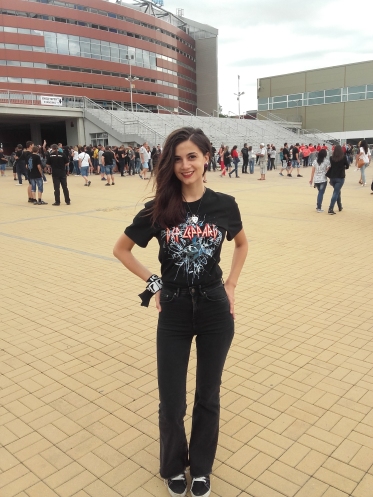 3. When we got inside, there was this merchandise shop, where you could buy T-shirts and other things, such as drinks and food.

4. We found our seats! I cannot really stand up for such a long time so I decided to buy tickets for the seating areas. It was maybe a bit far but I still loved it and the view from above was just perfect! As you can see the arena was a bit empty since it was still quite early. 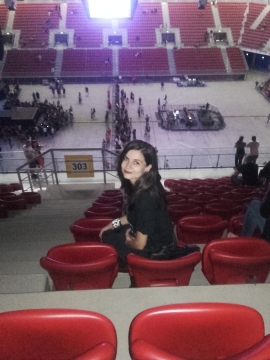 5. However, soon after, everyone started coming!

7. And after one hour and a half of heavy rocking and rolling, it’s over… 😦 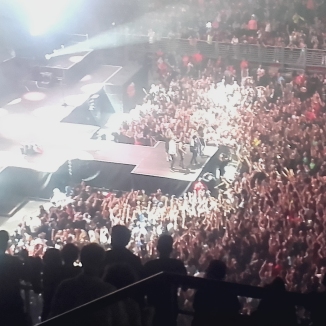 That’s me with a Scorpions headband I bought at the concert!

P.S. All the photos are mine. Please be kind and make sure that you don’t just save and use them without my permission! Rock on!