THE TURN OF A FRIENDLY CARD 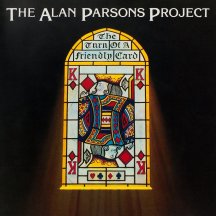 It’s time for some fine progressive rock, coming directly from one of the pioneers of the genre – the British rockers The Alan Parsons Project. “The Turn of a Friendly Card” opens up a door to the world of gambling by offering a brilliant selection of tunes, dealing with the theme. Often referred to as their most memorable and ear-pleasing work, featuring two of their greatest hits of all time “Games People Play” and “Time”, the record stood the test of time and is still on top of people’s minds when talking about progressive rock. Naturally, it became a commercial success as well, peaking at #13 on the Billboard 200 Chart. “The Turn of a Friendly Card” offers vocal variety and strength as throughout the album we get to hear Eric Woolfson’s delightful debut as a lead vocalist (“Time”), Chris Rainbow, Lenny Zakatek and Elmer Gantry. The record is well-produced, imaginative and highly enjoyable. Definitely one step away from the pretentious, overly-dramatic and world-spinning progressive music of the 70s but it still carrying out its idea in quite the exquisite way.

The sensitive ballad “Time”, the album’s finest work, is a song which can dissolve even the toughest, most resilient soul after just one listen. A song drifting away from the main theme of the album but if I may say their most beautiful work with some of the saddest lyrics in music history…”Goodbye my love, Maybe for forever, Goodbye my love, The tide waits for me, Who knows when we shall meet again, If ever…” If that doesn’t make you feel like you need a hug and a shoulder to cry on, then you truly are made of stone. The essence of the song comes from the superb vocal debut of Eric Woolfson who just makes the whole journey so much more enchanting. The synthesizer-driven “Games People Play” is another classic, captivating with its thrilling intro that transforms into a great mid-tempo rocker. “The Gold Bug” is a spellbinding instrumental that is often referred to as one of the band’s finest instrumentals. “Snake Eyes” is the album’s hidden rhythmic treasure, leaving us with a little sweet reggae aftertaste. The powerful but anxious title track, performed by Chris Rainbow, delivers a strong message with its lyrics, “…And they think it will make their lives easier, For God knows up till now it’s been hard, But the game never ends when your whole world depends, On the turn of a friendly card”.  The song is sending me to another century with its mysterious, quite antique atmosphere.

“The Turn of a Friendly Card” is an album that can satisfy the desires of both progressive rock and pop fans. That doesn’t mean it lacks imagination or that it doesn’t tempt us with its thoughtful themes and interpretations. On the contrary, it’s one of the most curious and alluring albums from the early years of the 80s. Needless to say, it’s also an absolute favorite of mine.

The Turn Of A Friendly Card

“The Turn of a Friendly Card” Official Wikipedia Page: https://en.wikipedia.org/wiki/The_Turn_of_a_Friendly_Card