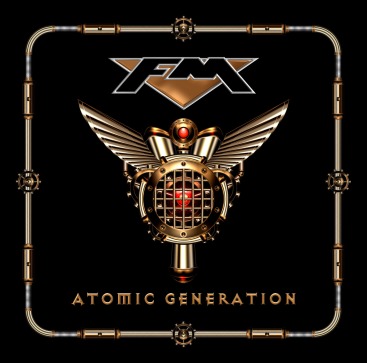 I’m immensely excited and so eager to talk about FM’s highly anticipated new album – “Atomic Generation”. What a time to be alive and to be a rock music fan! One of the most brilliant, most talented (though underrated in my opinion) bands is BACK and that’s not even the best thing. FM are back with what might be one of the most sophisticated and valuable releases of 2018. I knew they would bring their A game but what they brought turned out to be way more than that – “Atomic Generation” is a superb manifestation of talent, thought and thrill!

FM are widely known by their late ‘80s/early ‘90s albums, such as “Tough it Out” and “Takin It’ to The Street”. However, the past 10 years the guys have spawned some equally deserving masterpieces, including “Heroes and Villains” (2015) and “INDISCREET 30” – a new recording of their classic 1986 album. Now, it’s 2018 and it was time to dive into a new adventure – an eleventh one to be precise. “Atomic Generation” further solidifies their position as one of the undefeated champions of melodic rock and is another proof that the AOR era is everything but gone.

Let’s talk music! (I love this phrase so much)

11 stunning melodic rock pieces are shaping the eleventh studio album of FM. Don’t know if they did that on purpose but it’s pretty cool, isn’t it? Two things easily come to mind when you listen to this album for the very first time – firstly, once you hear Steve Overland sing, literally nothing else in life matters at that particular moment; the guy has a voice made of gold and he deserves all the praises for being in such great vocal shape; secondly, there’s an obvious, highly pleasant consistency trapped inside “Atomic Generation” that clearly shows why FM are one of the most cherished British melodic rock acts ever since the late ‘80s.

The opening track, “Black Magic”, is like a fresh breeze, gently playing with your senses. The intro is one of its strongest points, along with those “whoa-oh” sing-along moments. Love how FM put so many different unique touches on it – grooves, hooks, nostalgic melodic rock vibes, modern-day funky sounds and so much more. It never gets boring and I must have played it over a hundred times already. “Too Much of a Good Thing” is what I expect to hear on the radio during a sunny spring ride around town. The song has so much soul and color and you gotta be made of ice if it doesn’t touch your heart even a little bit. The Santana-reminiscent “Playing Tricks on Me” is an absolute winner and one of the greatest moments on the record. The second it starts playing, don’t hesitate – grab the person next to you and dance your night away! After that passionate fiesta is over, we are moving ahead with more traditional FM sound in the face of “Make the Best of What You Got”. “Stronger” is my favorite song from the album and it was love at first listen for me. The keyboard intro knocked me down and the progression of the song finished me. I am completely inlove with the lyrics and the powerful, encouraging, mood-lifting personality of the song – it was the thing I needed but didn’t know I do. The album wraps things up with “Love is the Law” – a soft, acoustic country ballad that cools off the spirits, with the help of Steve’s magical voice.

“Atomic Generation” can easily compete with all the FM’s classic albums in terms of influence and musicianship. I am praising them for all the effort they put in presenting such musical variety and still remain as classy as ever. It’s one of the albums of the year, you can trust me on that.

“Playing Tricks on Me”

2. Too Much Of A Good Thing

6. Playing Tricks On Me

7. Make The Best Of What You Got

9. Do You Love Me Enough