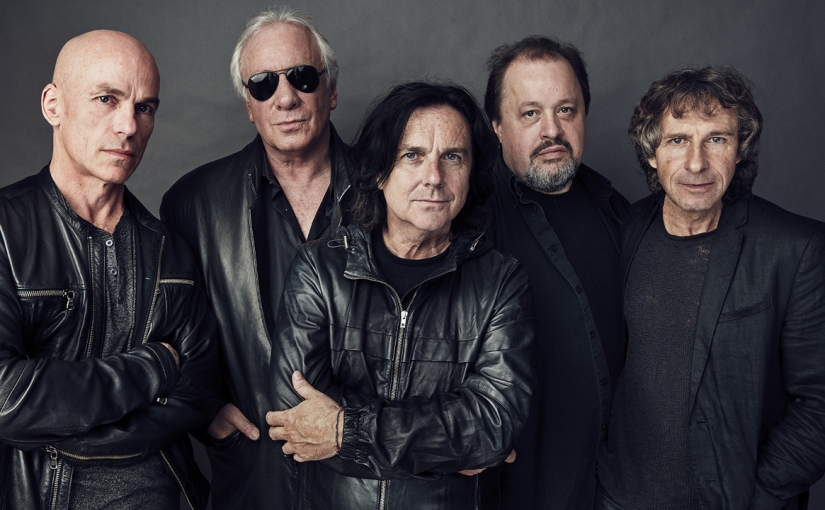 With so many unique rock bands out there, each bearing their own distinctive style of sound, appearance and approach to music, no wonder people can never get tired of live music and crave for more and more. I’ve always been a fan of live musical events, not just because I’m a fan of a certain band but because that’s the most genuine way to touch the heart and soul of the artists and turn it into a distinctive piece of memory you can always carry with you. There are bands out there that devoted their entire career to making spirit-lifting music, full of encouragement, excitement and confidence. Their concerts are usually filled with tons of action and fire, leaving the fans tired but satisfied to the bone.

There are also of course, the bands that make music with deeper, more complex meanings, complemented by more sophisticated sound and instrumentation. We refer to this type of rock as progressive, so I will just stick to this term for now. I’ve been a fan of progressive rock for a long long time but honestly, I’ve never attended a concert by a progressive rock band. I’ve had my ideas and expectations but once you actually witness it in front of you, you see how little you know and how much more you have yet to understand and experience. In that sense, I am quite proud and privileged to have the legendary British neo-progressive rock band Marillion come to not just my country, but to my hometown and reward me and their fans over here with not just a concert but an impossible manifestation of audio and visual techniques, creating one of the most spine-tingling and arousing musical journeys of my life so far. I must say, I’m not the most devoted fan of the band but I was never in a million years going to miss the chance to see their life-changing show. I hope to inspire you with my story and do justice to Marillion because believe me, those guys know how to deliver a striking not just musical but theatrical performance and you just gotta go see it while you still have the chance.

I should start by saying that Marillion challenged every norm and standard I had in my mind about rock concerts. The entire evening was one endless stream of sensual audio and visual provocations, topped with a magical artistic performance by vocalist Steve Hogarth. To many it was probably just a different kind of concert but to me it was way more than that – it was a beautiful theatrical presentation, incorporating compelling singing, melodramatic gestures and body movements and irresistible audience interaction, all decorated with stunning visual effects and videos that perfectly complement every song and the lyrics. I’ve never seen anything like this before. Marillion certainly put a lot of effort to make a “heavy” show; I say heavy but I don’t necessarily refer to the music. The show itself required a lot of attention and sweat from the viewer. We were assaulted with many different show pieces, all challenging each and every one of our senses; The concert put me to a test – it’s been a while since I last felt so uptight but definitely in a good way.

I’ve been talking so much about the excellent visuals and now it’s time to actually show you. The venue here also played a huge rule in the atmospheric progressive experience. My readers might be familiar with it from my Nazareth concert experience article a few months ago as it’s the same one – The Roman Amphitheater in Plovdiv, Bulgaria. 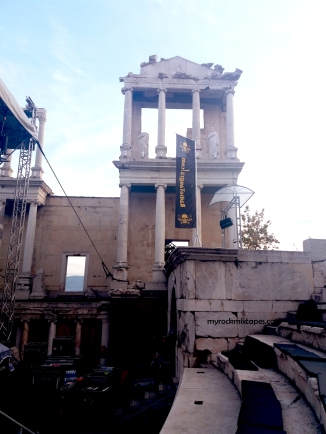 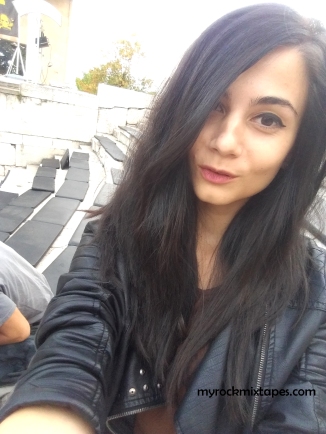 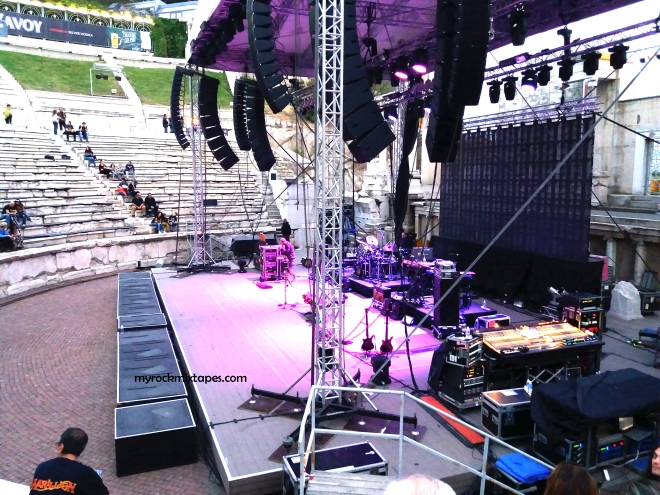 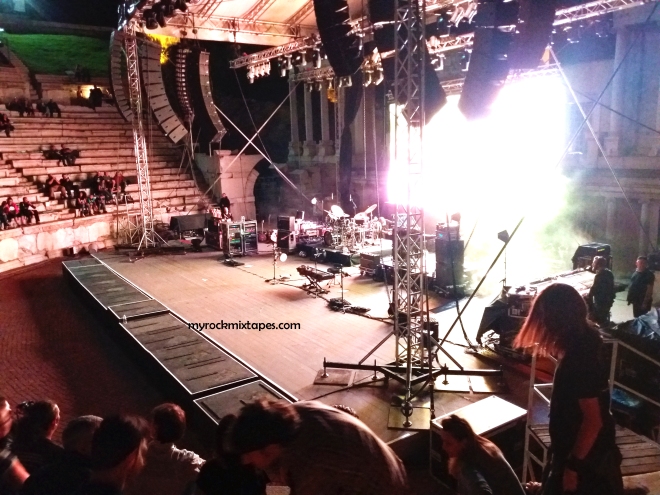 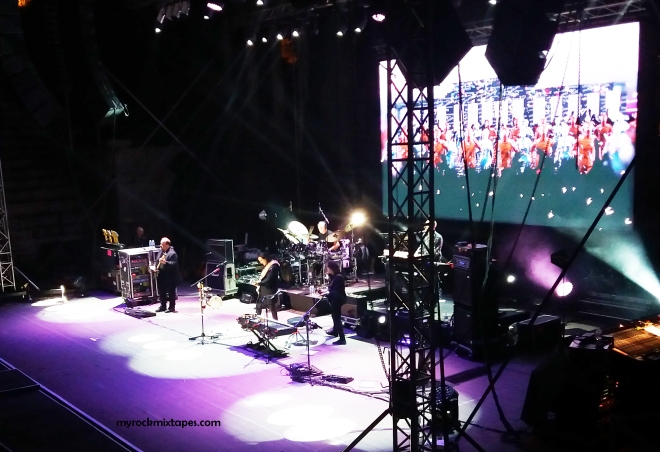 You could clearly see how much time and effort were put into the making of those videos that were accompanying each performance. The lyrics perfectly matched the scenes and it provided the audience with another treat to watch out for. To me, the most appealing aspect of the show was when they performed “King” and the video behind them showed famous artists and musicians who have passed away, including Bon Scott, Elvis Presley and of course, my Steve Clark who I miss so much. It was unbelievable! 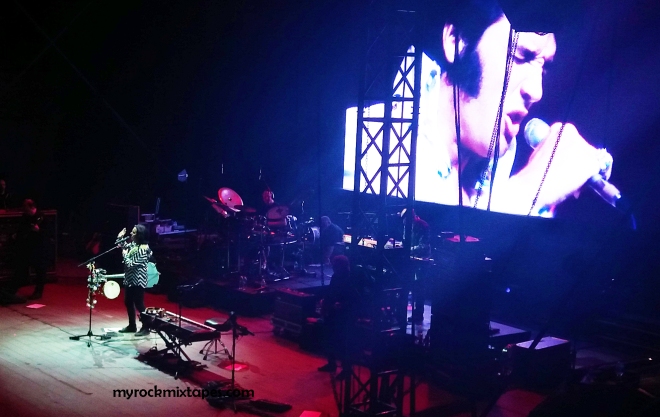 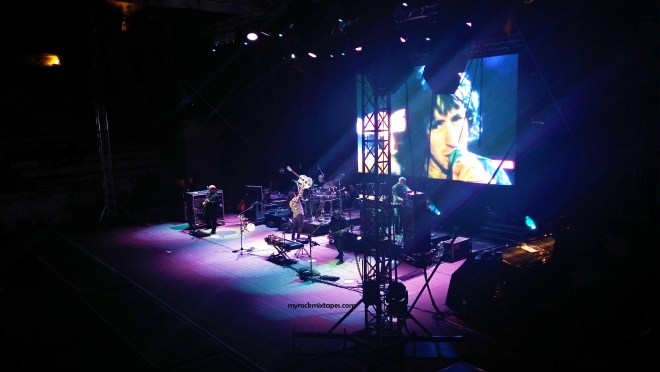 Steve Hogarth was undoubtedly the star of the evening. The man doesn’t know any limitations and once in character, nothing or no one can stop him. His performance was a work of art. I cannot specifically talk about his singing or acting or stage presence, because it’s just one whole and you don’t know where Steve the actor and Steve the singer merge. It was a pleasure to observe how he becomes one with the music, the stage and the audience. He delivered many unique performances but I gotta say the way he did “The Invisible Man” stood out the most to me. Maybe because it was the first encore and the audience sensed that we are about to wrap things up, the air around us became thicker. That’s something I will never forget. One more thing I have to acknowledge is his keyboard skills – the man is an alien! 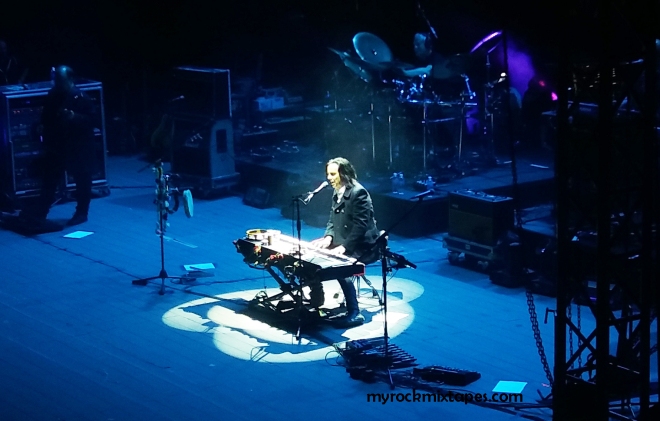 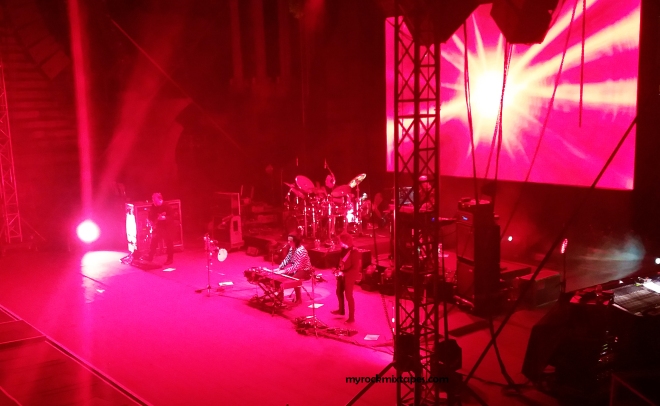 As a young fan, who saw Marillion for the very first time, all I can say is that those guys changed a lot of perceptions I had for artists’ stage presence and musical delivery. I met new songs and learned new lyrics, which I guarantee will become an inseparable part of my life (“You’re Gone” and “Power” for example, both impeccable rock pleasures). I am delighted that I had the chance to witness this other type of concerts – the ones that make you think and observe carefully. I was so used to the crazy rock&roll vibes that make you jump around and party hard so I really needed this refreshing art experience. Thank you, Marillion.