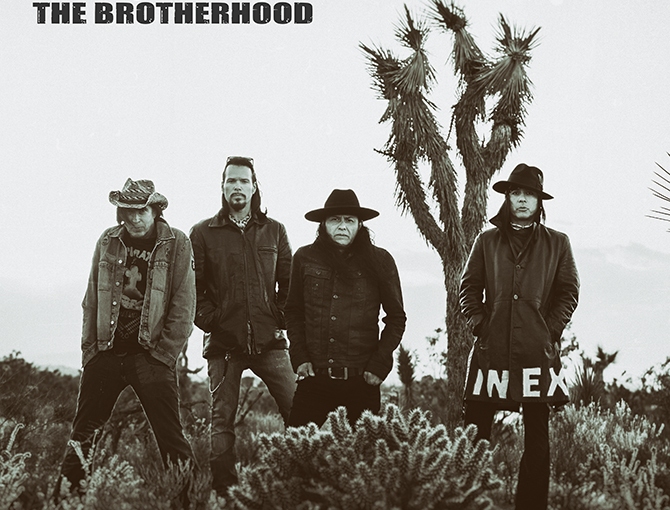 What is happening in the rock music industry right now makes me immensely proud. It’s been a while since I was that nervous (but excited) about which new CD to purchase first, which new album to focus on today and which song to play. I literally had to schedule my listening hours because there’s just so many outstanding things coming out these days. What a time to be alive and be a fan of rock&roll!

I knew September was going to be one of the strongest months for rock music this year but I wasn’t entirely ready for that powerful initial impact, coming from Lynch Mob. I needed some time to listen to the album as many times as it deserved before I could put my thoughts together and write this review. Obviously, as you sensed from my tone, “The Brotherhood” left nothing but a fabulous impression on me, combined with that sweet sweet relief that your expectations were not only met, they were exceeded.

“The Brotherhood” is Lynch Mob‘s eight studio album and it was out on September 8th via Rat Pak Records. It’s the follow-up to their 2015 release, “Rebel” that stunned everyone with its production qualities and sensational guitar work. The title of the album – “The Brotherhood” reflects the strong bond between the members of the band. The guys surely had a long and bumpy road, but it’s fascinating to see how far they went and what they accomplished not as just members of the same band, but as brothers. I think that artistic and personal relationship, as well as comfort and reliance on each other was perfectly reflected on the music. Vocals, drums, guitars – every instrument, every note, every riff …they are all complementing each other, crafting the perfect alliance. I mean we all are well-aware of the magical chemistry between Lynch & Logan so no surprises there. The dominating guitars of legendary George Lynch, combined with the polished, quite rare (these days especially) vocal talents of Oni Logan are turning “The Brotherhood” into a one-of-a-kind experience.

When Lynch Mob released the MV for “Main Offender”, I just knew that these guys won’t mess around with this album. The song merely signaled the arrival of a strong pretender for “rock album of the year”. Honestly, they couldn’t have picked a better opening song. You want to make a statement? That’s how you do it. The destructive, highly energizing track, full of attitude and fierce riffs is one of my highlights of the album and it will definitely be in my Top20 songs of 2017 list. The heavy metal thunder moves on to the groovy “Mr. Jekyll and Hyde” – a very interesting song to experience with obvious psychedelic motives, bringing us back in time. The cheerful “I’ll Take Miami” reminded me of Van Halen‘s early days (which of course is a beautiful thing). “Last Call Lady” has to be one of my personal favorites and if you appreciate great rock melodies (like myself), it will quickly turn into yours as well. “Where We Started” offers an appealing diversity in the playlist; I’m absolutely blown-away by George‘s marvelous guitar work on this one – the harder-edged guitars are ruthlessly playing with the listeners but are not at all thrusting. “Until the Sky Comes Down” and “Black Heart Days” are both quality signature tracks, worthy of playing as loud as you can. It’s fascinating how the pleasingly odd acoustic bliss, titled “The Forgotten Maiden’s Pearl” is the one that actually sticks with you after you hear the entire album for the first time. I am absolutely loving the Zeppelin vibe on this one. “Miles Away” is the “must-have” ballad (I had a feeling this was going to be a ballad just by reading its’ title). It’s so much more than “just a ballad” though. Oni Logan is absolutely killing it on this one; don’t even get me started on those mesmerizing riffs that are giving me goosebumps. It might as well be my favorite song from “The Brotherhood”.

Final verdict: “The Brotherhood” deserves an honorable place in this year’s collection. The songs are rich in every musical aspect you could think of – lyrics, riffs, vocals, etc. It’s heavy, it hits you hard, it is a bit dark, even; however in the most satisfying way you can imagine. Pay attention to the lyrics which in my opinion are one of the strongest aspects of the album – poetry in its finest. Modern-day feel? Yes, maybe here and there; but the album actually has a genre and style of its own or follows any rules. It’s the perfect album to allure new generations of rock fans with and certainly a great comeback for a beloved, unconventional rock band. Cheers to Lynch Mob.

3 thoughts on “Album Review: Lynch Mob are Back with “The Brotherhood””