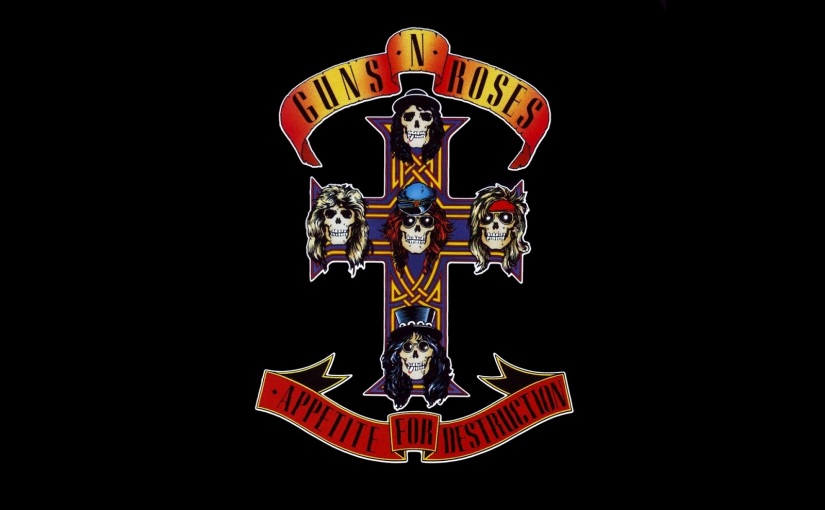 1987 was one of the strongest years of rock music and this album right here is most certainly one of the main reasons why. Today, on the 21st of July, 2017, we celebrate the 30th anniversary of one of the biggest rock statements. To commemorate its release, I think it’s only fair to dedicate a little publication, remembering some of the timeless highlights on it – songs that defined generations of rockers and fans…

In 1987, Guns N’ Roses blew up the music industry by exploding onto the national scene with their first and best album! In addition to being one of the best-selling albums of all time, “Appetite for Destruction” also happens to be the best-selling debut album in history of music! What a debut that was! Not only did it peaked at the number one spot on the Billboard 200 Chart, but it also reached top 10 positions in Australia, Canada, Norway and Sweden.

Needless to say, the album was an absolute turning point for the hard rock/metal genre and its direction. Ferocious rock anthems such as “Paradise City”, “Welcome to the Jungle” and “Nightrain” have been clogging the airwaves ever since the release of this rock tornado. Guns N’ Roses crafted something extremely dangerous, raw and quite nasty that actually brought nothing but fun and great time to the public. The sound is rough, the lyrics are vulgar and fierce but it’s the 80s we’re talking about – the ultimate time to be as outrageous as you want to and enjoy it to the max! The success of the album was somehow contributed to its hedonistic “sex, drugs and rock ‘n’ roll” theme which greatly appealed to the mass. The band incorporated elements of punk rock, glam metal, hard rock and metal music to come up with this primal sound that reached the absolute level of breakthrough. I personally don’t think the band will ever reach such highs, such speed or such level of musicianship. Bottom line is, “Appetite for Destruction” is the record that proved that people can’t really escape from themselves but that’s not necessarily a bad thing!

The album makes its clear statement right from the beginning. The first track, “Welcome to the Jungle” is a symbolic door through the brutal, nasty, drug-infested and dark world of L.A. The track sends us on a journey to the city’s most awful secrets. The story, told by Axl and his exceptional but rather ghostly howls, quickly brings out to the surface our deepest fears. This song has to be one of the most powerful intros in rock music! The MV is also a classic.

“Paradise City” is probably the single track they owe their success to. With an exceptional mixture of blues, punk and hard rock motives, the song is everything but your ordinary 80s rock tune. “Paradise City” captivates right from the beginning with its unique rhythm, escalating guitar riffs and Axl’s aggressive, quite forceful but energetic vocal delivery. The theme of the song is similar to that of “Welcome to the Jungle” – they knew how to convey a message using the proper tools and words!

This is my personal favorite song from the album and I’m particularly fond of the music video! Can we please go back and attend such concerts??

In the power ballad “Sweet Child o’ Mine”, Axl, Slash and company prove that they can be vulnerable and deliver something romantic and atmospheric with no efforts. This song perfectly demonstrates the outstanding guitar abilities of Slash and surprises us with a very catchy hard-rock beat and beautiful lyrics.

“Nightrain” is another song I would like to focus your attention at. Yet again, we are transferred to the sinful, alcohol and drug-fueled world of L.A. Axl’s vocal delivery, in combination with metallic hard rock guitar riffs give us a little bit of an AC/DC vibe.

“Think about You” is in my opinion a very underrated track. By including it in this publication, I only wish more people would realize and experience its true value. It’s a sweet love song that creates the perfect mood! The rhythm and the lyrics absolutely do it for me!

Last but not least, let’s remember “Rocket Queen” which seems to be everyone’s favorite track! I’m absolutely inlove with the riffs and the lyrics on this one…

What is your favorite track?