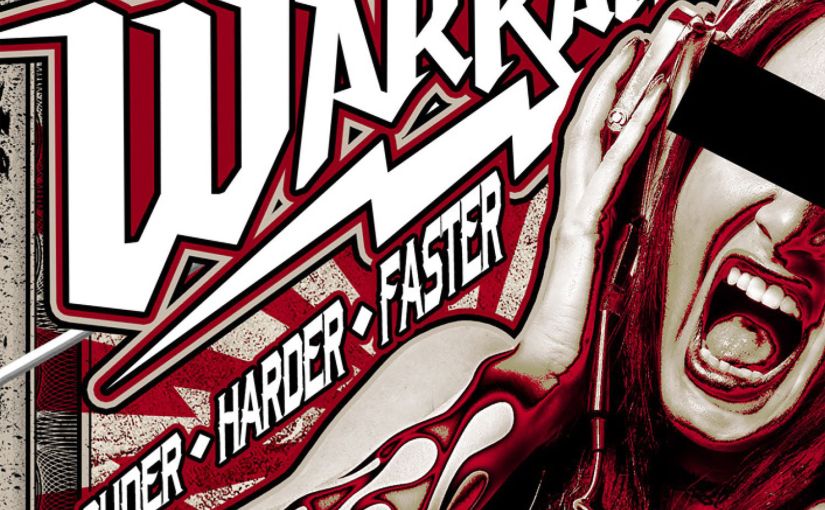 It has been six years since one of our favorite ’80s/’90s hard rock bands, Warrant, released an album. “Rockaholc”, featuring vocalist Robert Mason (Lynch Mob, Cry of Love) for the very first time, hit the market in the spring of 2011 – just a few months before the tragic death of Warrant’s original frontman, Jani Lane. No one can take away the precious memories the immensely talented Jani brought to us with his music, but it’s also okay to make new memories with new music, styles and voices. With that being said, I encourage you to listen to “Louder Harder Faster” with an open mind, expect something both familiar and new and most importantly, enjoy music the same way you did 20 or so years ago.

I may as well write a three-word review about Warrant’s new album and call it a day. Guess which words I will use… That’s right – Loud, Hard and Fast! The title says it all – you are in for a real wild, fiery and pleasantly devastating rock&roll experience right from the very first second! Frontiers Records keep on releasing one smashing album after another and I can barely keep it up with all that awesomeness. Have some mercy, please… 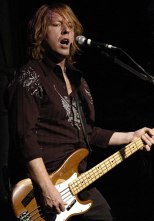 Before I dig a little deeper into individual album songs, I want to applaud the superb production of “Louder Harder Faster”, courtesy of the legendary Jeff Pilson (Dokken, Dio, Foreigner) who I believe did an outstanding job, capturing the mood of the album. I’ve been a fan of Jeff, his music and production work for so many years now and he still keeps on impressing me with every new project! Remember how well he did with Last in Line’s debut album, “Heavy Crown”? Expect something in similar, if not in higher production level – he truly did great! 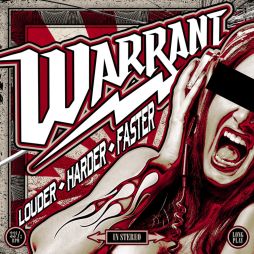 Back to “Louder Harder and Faster” which is a reason enough why 2017 could be considered a strong hard rock year! Original Warrant members, Erik Turner, Jerry Dixon, Joey Allen, and Steven Sweet, together with the returning for the second time vocalist Robert Mason have cooked a real knock-out album, stirred with the band’s trademark melodic rock hooks and tons of modern-day surprises! This killer direction is what makes “Louder Harder and Faster” suitable for any rock fan out there. You don’t need to know songs like “Heaven” or “I Saw Red” (tactically avoiding that one song we all know by Warrant) to be able to enjoy and rock on to Warrant’s 2017 release! I think what they did with this album is truly universal and “generationless” and they will most certainly grab the attention of the younger audiences.

“‘Louder Harder Faster’ is truly one of our best records to date. It has all the classic Warrant ingredients that people have come to know, plus a lot of extras that keep it in the modern realm of todays music. It’s a perfect mix between Balls and Ballads. When we started this project over two years ago, we wanted to bring the listener back to the days of sitting in the living room and cranking up a record from start to finish. Making full records seems to be a lost art, we hope in some small way that this album helps people find that art again,” said bass player Jerry Dixon.
(quote retrieved from http://www.antimusic.com)

The 12-song rock&roll gem, featuring a cover of the classic Merle Haggard song, “I Think I’ll Just Stay Here and Drink”, is your ultimate party album! With blazing melodic rock anthems, including the title track, “Louder Harder Faster”, “Devil Dancer” and “Only Broken Heart”, you will definitely be juiced up for days to come. The opening track is your perfect modern-day rock&roll tune, which grabs you by the throat from the first second! Vocalist Robert Mason is truly impressive on this one; not that he has to prove anything to anyone but if he had to, this song right here will shut everyone up! “Devil Dancer” is a personal favorite – those riffs just penetrated my skin and there’s no way I’ll recover. The sing-along tune “Perfect” is another highly memorable point! Pay attention to those harmonies sweet sweet lyrics; that song just won me over after one listen! There’s another side to the Warrant and this album, though. The piano-driven “U in My Life” is a beautifully-done ballad I can listen for days. I wish it had a bit stronger punch into it, though. “Music Man” is a very intriguing track; it starts slowly with just a simple acoustic guitar accompaniment but it nicely progresses into a cowboy blues tune, telling a story worth hearing. “Big Sandy” is another jumpy rocker, meant to lift your spirits. The rest of “Louder Harder Faster” is just as good. Gladly, the physical copy of the album includes the stimulating cover of “I Think I’ll Sit Here and Drink” which triggered a physical reaction in me upon listening. You know a song is good and the vocalist plays with you once your body starts moving and you feel the groove. I think it might be one of my favorite moments from the album.

Final verdict: I will be brief: Play it LOUD, party with it HARD and buy it FAST. (haha)

“Warrant Announces New Album”: http://www.antimusic.com/news/17/March/10Warrant_Announce_New_Album_Louder_Harder_Faster.shtml
P.S. I don’t own any audio or visual material used in this publication. All the rights and credits go to the owners and/publishers.
The publication expresses my personal opinion and in no way is trying to make a generalized statement. Please be kind and considerate when you read and/or comment.
Cheers~