You are casually browsing through the suggested section on YouTube, looking for your next favorite old-school rock band – one of the millions you have yet to discover and then BAM, you see the name “Sleeze Beeze”. From here on, you can go two ways; way number one – you just ignore them, thinking it’s just another one of those sparkly spandex-wearing youngsters that don’t want to be taken seriously and named themselves so foolishly just to attract attention to their average heartbreak tunes… or way number two – you decide to check them out anyways, with the hopes that there might be something there. Guess which way I went?

The name did throw me off a little, but I was too curious to just let it go. Also, once I saw the name of their sophomore album, “Screwed, Blued & Tattooed” I couldn’t just walk away. One thing I give them, ridiculous or not, it does catch your eye.

Who are Sleeze Beeze?

The most important thing to know about Sleeze Beeze is that they a hard rock band from the Netherlands and lasted for about 9 years (from 1987 to 1996) before they called it quits (reunited in 2010, though). Overall, the band released four studio albums, out of which the debut with Atlantic records (and second release), “Screwed, Blued & Tattooed” (1990) turned out to be their most successful one, introducing the band to the American market and audience. MTV once again participated in the initial success of the band by giving tons of airtime to “Stranger Than Paradise” – one of the singles from the sophomore album. 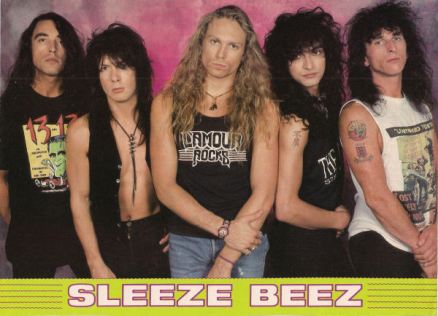 Now let’s talk about this album with the bizarre name – a name which definitely didn’t help their case, in my opinion. But hey, it was the ’80s  and it was all about fun, nihilism and doing whatever the hell you want! So let’s not fall into despair and just focus on the music, instead.

“Screwed, Blued & Tattooed” is one of those albums which I say are “worth discovering” and definitely one of the exciting releases of the early 90s. From the opening powerful slap – “Rock in the Western World” to the playful wrap up song “Girls Girls, Nasty Nasty”, the album is one hell of an entertaining piece of hard rock music! Don’t get me wrong, the album is far from perfect or groundbreaking but with lively and highly amusing tracks like “House is on Fire”, “Damned If We Do, Damned If We Don’t” and of course the title song, I feel like I can totally forgive and forget. “Stranger Than Paradise” is unquestionably the finest moment on the album and definitely a song that had the potential to stand against any Bon Jovi, Winger, Great White or Poison song. After a couple of tracks, we finally get to the power ballad – “This Time”. It’s as good as any power ballad of the era, that’s all I have to say. If you are a power ballad enthusiast like me, then you will love it for sure! Check out the rest of the songs – “Heroes Die Young” and “Don’t Talk About Roses” are striking highly deserving rockers as well!

Ultimately, Sleeze Beeze didn’t really predict the strong invasion of the alternative rock scene and their album was quickly forgotten. I can understand why, believe me – in addition to the bad timing, the album (was)is a total cliché. However, I am still recommending it because sometimes those partying non stop/sex/living the life clichés are the ones that help us go through the day. Listen to some tunes and the album below!

“House Is On Fire”

…or you can just check out the whole album:

Sleeze Beez on Wikipedia: https://en.wikipedia.org/wiki/Sleeze_Beez
P.S. I don’t own any audio or visual material used in this publication. All the rights and credits go to the owners and/publishers.
The publication expresses my personal opinion and in no way is trying to make a generalized statement. Please be kind and considerate when you read and/or comment.
Cheers~