The strong ‘80s hard rock influence could still be felt during the first couple of years of the ‘90s. I often say that 1992 might be the last good year of hard rock music, before grunge stole the time and affection of every little or big media outlet out there. Surprisingly, however, despite the grunge wave that flooded the early ‘90s, good AOR/hard rock releases kept on appearing here and there. If you were a big name in the ‘80s and had a loyal fanbase, you still had the chance to survive the grunge apocalypse; however, throwing a coming out party after 1992 was an absolute suicidal mission. Nevertheless, a few months back I discovered this rare melodic hard rock gem which totally knocked my socks off! At first I thought it was released sometime in the ‘80s – probably the second half of the decade. Then, I saw the year – 1994 and I was both shocked and angry; shocked, because it sounded from another time and angry because it was too good to be out at a time when no one could appreciate its true value! Nevertheless, I am happy that Atlantic’s “Power” found its way to me and introduced me to the instant-favorites, like “Power Over Me”, “Can’t Hold On” and “When The War is Over”. 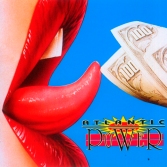 Ignoring the provocative and rather unappealing (at least to me) album cover, “Power” has a lot to offer to any fan out there, looking to quench his melodic rock thirst. The British rockers crafted something not so unusual but highly satisfying and definitely worth your time. Led by vocalist and songwriter Phil Bates, who has a long and quite versatile music career, Atlantic hit the AOR market in 1994 with “Power” which unfortunately (though quite predictably) turned out to be their first and last album. Phil went on to do bigger things, including recording songs for famous TV shows and becoming the lead singer of ELO Part II – a spin-off band, formed by Electric Light Orchestra drummer and co-founder Bev Bevan.

Let’s talk a little bit about the highlights of “Power”. Where do I even begin? “It’s Only Love”, “Power Over Me”, “When The War is Over”, “Every Beat of My Heart”, “Can’t Hold On”, “Bad Blood” (and I may as well just write down the entire tracklist) – all showcasing solid AOR power and nothing but talent. I’m a sucker for a good hard rock hook; to me it’s all about the melody and this album right here was made for people like me. “Nothing to Lose” has to be one of my favorite moments from “Power”. Songs like this one put the “power” in a “power ballad”. If only this tune was released as a single during a more suitable time period, I bet it was going to be an absolute radio-sensation. The most famous track to come out of Atlantic‘s debut record has to be “Can’t Hold On” and we shouldn’t be surprised cause it’s the epitome of AOR – synthesizer hooks, melodic riffs, solid-rock sound and of course, a splendid vocal delivery to complete the entire picture!

Final verdict: Enjoy it as much as you can because they don’t make them like this anymore. “Power” is the PERFECT example of a well-made melodic rock record and it’s such a pity that people don’t really remember or listen to it nowadays. It’s not full of timeless classics but it’s full of great mood and impeccable talent! Take a moment of your time to listen to this unfortunate and underrated rock album from start to finish – it might find your next favorite old-school tune somewhere in there, just like I did.

“When The War is Over”

I highly recommend you guys listen to the entire album from start to finish:

References:
P.S. I don’t own any audio or visual material used in this publication. All the rights and credits go to the owners and/publishers.
The publication expresses my personal opinion and in no way is trying to make a generalized statement. Please be kind and considerate when you read and/or comment.
Cheers~