I’ve talked about that magical year of 1992 before in my “16 Reasons Why 1992 Rocked Pretty Hard!” article and it’s time to talk about it yet again!

The times, they were changing; the ‘80s were long gone and with them the good old ways of rock&roll. Grunge was occupying all the attention of major music media outlets and labels and people were shifting their musical preferences from heavier hard rock to softer alternative rock. Nevertheless, the strong heavy metal thunder could still be heard during the first couple of years of the new decade. From solid comebacks to refreshing debuts, the early ‘90s offered a wide range of intriguing rock music events before it all died out by mid-decade.

This time I would like to focus on a band that formed in 1991 and debuted in 1992 with what I consider as one of the most exciting albums of that year. I’m talking about Hardline and their coming out party, titled “Double Eclipse”.

Brothers Johnny Gioeli and Joey Gioeli joined forces with none other than Bad English and Journey’s Neil Schon, along with bass guitarist Todd Jensen and drummer Deen Castronovo. All together, they attacked the music scene with a highly satisfying, though overlooked, glam rock record, possessing every little detail needed to captivate the hearts of any heavy metal fan out there. 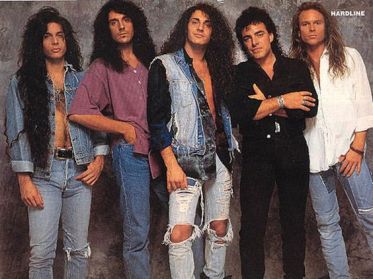 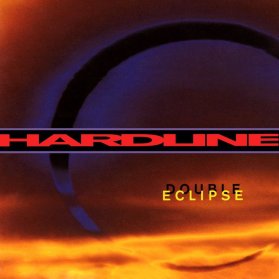 From a fan’s point of view I can only say two things about this album. First of all, the inclusion of Neil Schon in the picture shouldn’t scare you at all – there’s no trace of that sweet, tender, quite melodic Journey or Bad English vibe on “Double Eclipse”. It’s a ferocious rock release, with a lot more edge and tons of character. Needless to say if you are a fan of ‘80s hard rock, you most certainly can’t go wrong with “Double Eclipse” – it’s the exact thing you need to complete your collection! Second of all, once in your life you might come across an album which is worthy of occupying almost an hour of your life. “Double Eclipse” is one of those rare gems with no fillers and no boredom – every song is a potential favorite and guarantees a good time!

Speaking of songs, let’s talk a little bit about the playlist. We have our radio staples – the catchy, energetic “Takin’ Me Down”, the lovely ballad “Can’t Find My Way” and of course Hardline’s version of Danny Spanos’ “Hot Cherrie” which actually scored a top 30 chart position in 1992. The solid opener and a personal favorite, “Life’s a Bitch” turned into one of my theme songs. The lyrics are on point and don’t even get me started on those mind-blowing guitars. “Rhythm From A Red Car” is yet another hair-raising surprise that guarantees a splendid time! The mid-tempo, “Love Leads The Way” and the guitar-driven ballad “Change of Heart” are just a couple of the other valuable assets, characterizing “Double Eclipse”.

Final verdict: “Double Eclipse” by Hardline is an album worth discovering and adding to your AOR/Hard Rock collection. Too bad Neil Schon didn’t stick around much with those talented guys and went on to pursue other projects. Don’t think twice – crank it up and enjoy it! 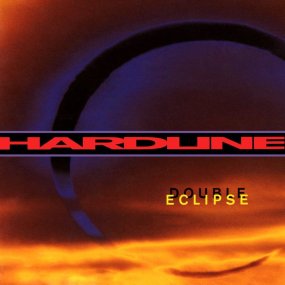 “Double Eclipse” Official Wikipedia Page: https://en.wikipedia.org/wiki/Double_Eclipse
P.S. I don’t own any audio or visual material used in this publication. All the rights and credits go to the owners and/publishers.
The publication expresses my personal opinion and in no way is trying to make a generalized statement. Please be kind and considerate when you read and/or comment.
Cheers~

One thought on “HARDLINE’s “DOUBLE ECLIPSE” – An Album Worth Discovering”