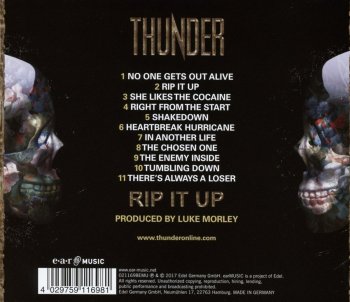 Thunder are back with a brand new studio album, titled “Rip It Up”. The follow-up to their highly successful, Top 10 2015 release, “Wonder days” has finally arrived and is loaded with a serious collection of mindblowing rock tunes, destined to become future classics. The title says it all – “Rip It Up” tears down all musical and creative barriers. That “now or never” attitude of Thunder is winning them the big points! The album showcases their new-found creative strength and obvious self-rediscovery, all packed together with their thunderous, indestructible spirit that made them a household name back in old-school days. Guitarist Luke Morley and vocalist Danny Bowes formed Thunder in 1989 and the rest is…well, what a history! 27 years after a groundbreaking debut album, “Backstreet Symphony”, fuelled with hard rock staples like “Dirty Love” and “Love Walked In”, Thunder are still going as strong as ever and their eleventh studio album, “Rip It Up” is simply another important stop on their long way to go.

“After the positive reaction to ‘Wonder Days’, we were very happy, and it justified the approach we took in the writing and recording. We decided to push it further on all fronts this time, to see what happened, and I think it shows in the writing and the individual performances. We couldn’t have made this album 10 or even 5 years ago, we weren’t good enough! We’re really looking forward to playing the new tunes live alongside the more established ones.”

“No One Gets Out Alive” is a promising opening track that welcomes you to one truly fascinating world where hard rock is a religion and Thunder are one of the Gods. It’s a fearless composition that impresses with its striking lyrics that tell us that we might not live forever, but that’s totally fine! Danny Bowes is sending a strong message – don’t waste your time away and enjoy the ride! The title track is as fierce as its name. “Rip It Up” became an instant favorite of mine with its atmospheric bluesy/old-school party vibes that just make you forget about everything. “She Likes the Cocaine” was inspired by a woman who guitarist Luke Morley used to know back in his days of youth. The lady in question used to be the heart and soul of the party and so many years later, she still is (at least that’s what Luke says). The song takes on a lighter perspective of drugs, looking at things through the fun way of it. Lynne Jackaman is making a memorable appearance on the track with her outstanding backing vocals. “Right from the Start” slows things down to remind us why ballads are so important for any release. Thunder have always been famous for their slower-paced tunes and there’s a reason why. Their trademark ballad sound is immensely captivating. “Shakedown”, “In Another Life” and “The Enemy Inside” are just a few of the heavier, upbeat rockers that bring that much-need intensity caused by the satisfying clash between deafening guitars and bold vocals. “Rip It Up” wraps things up with another soft rocker, titled “Everyone’s A Loser”. Nothing much to say about this pleasing end to a splendid album, except that indeed everyone who doesn’t listen to this album is a loser.

“Rip It Up” is Thunder’s gutsy confession, incorporating elements of their well-established formula for success into a solid modern-day hard rock sound. I didn’t expect the album to contain any unprecedented, far-out tracks so I wasn’t really disappointed when I got this well-known enjoyable piece of good old rock&roll music. Bottom line is, Danny Bowes still has the pipes and Luke Morley can still write extraordinary songs. So get ready for an album that will easily compete for the greatest rock release of 2017, I’m sure of it.

“Rip It Up” Official Song Stream

No One Gets Out Alive

THUNDER To Release ‘Rip It Up’ Album In February, retrieved from http://www.blabbermouth.net/news/thunder-to-release-rip-it-up-album-in-february/#UhDxQEZhpkxtss80.99
“Rip it Up” Official Wikipedia Page: https://en.wikipedia.org/wiki/Rip_It_Up_(Thunder_album)

One thought on “THUNDER – “Rip It Up” Album Review”