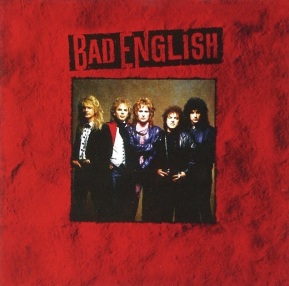 The supergroup Bad English rose from the ashes of Journey and The Babys. Despite their short-lived career which spawned only two studio albums, keyboardist Jonathan Cain, guitarist Neal Schon, vocalist John Waite, bassist Ricky Phillips and drummer Deen Castronovo deserve a praise for crafting a debut album that not only wrapped up the 80s in quite the fashionable way but also left behind a series of great tunes that still lift our rock spirits!

The debut, self-titled album of Bad English offers a refreshing and quite fantastic, if I may say, mixture of ballads and rockers. The band adopted a simpler, more accessible pop sound, rather than going for the loud hard rock approach. However the quality, flexibly and diversity of this melodic rock bliss resulted in a substantial airplay and a considerable commotion in the last year of the 80s. The ballads of “Bad English” are shining much brighter than the other tracks, though. “When I See You Smile” is a power-ballad staple and a number 1 hit. It’s also the song that made them famous and established them as pioneers of such type of songs. Fans see nothing wrong with that as “When I See You Smile” is nothing but a sweet and quite catchy romantic song with pretty memorable keyboard intro. Kudos to Songwriters Hall of Fame inductee Diane Warren for writing it! The other thrilling ballads from the record, “Ghost in Your Heart”, “Possession” and “Price of Love” further cemented their position as a band that just knows how to deliver touching but fairly heated slower tunes. The striking rocker “Best of What I Got” is an absolute personal favorite due to my immense love for the movie “Tango & Cash” (1989). The tune was featured in the soundtrack and became the reason why I got to meet Bad English for the first time when I was a kid (I still have the video cassette). Very underrated rock song despite possessing such an electrifying aura; it’s one of those tracks that can immediately fix my rainy days. “Heaven is a 4 Letter Word” is another catchy, rather hot AOR hit, leaving a lasting aftertaste.

I honestly cannot say a bad (English) word about this album (see what I did, there hehe). This pop/rock assembly has so much energy in it that there’s no way you wouldn’t enjoy it. The guys are incredible songwriters and John’s vocals fit perfectly into the whole picture. If you love melodic hard-rock, this is the album for you.

Best of What I Got

Heaven is a 4 Letter Word

When I See You Smile

Ghost In Your Heart