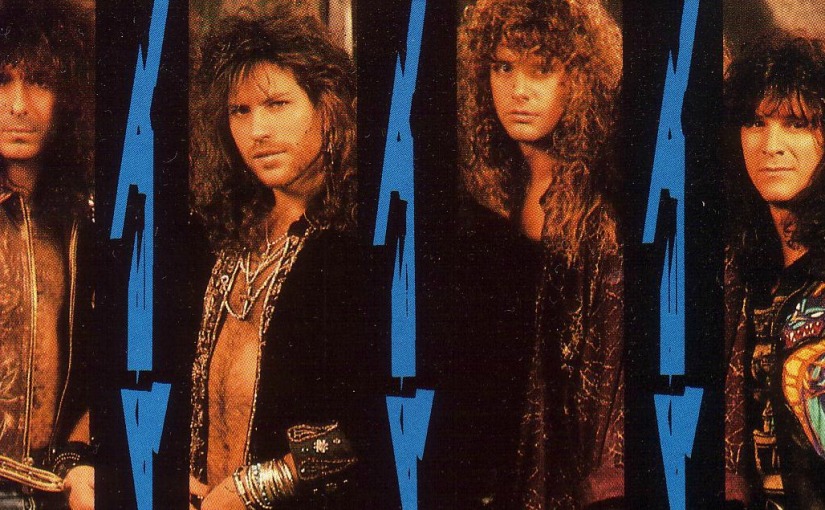 “Headed for a Heartbreak” was one of those songs which I instantly fell in love with, the very second I heard for the first time. I had no idea who Winger were but thankfully, this song opened a new door for me and I got the chance to explore more of Kip Winger’s incredible voice and persona, as well as discover other beautiful songs of them, such as “Miles Away” and “Seventeen”.

Winger debuted way too late. The 80s were long gone, music styles and directions were changing and the hair/glam metal era was beginning to fade. What they were bringing to the table was no longer desired, unfortunately. Just after a few successful singles and two platinum albums, they decided to call it quits. Yes, they did release a bunch of new stuff in 2006, 2009 and 2014 but, you know, it’s not the same. To me, personally, their first two albums were absolutely the best!

Anyhow, as I was saying, “Headed for a Heartbreak” is definitely one of my favorite ‘80s rock tunes and most certainly in my “top 10 power ballads” list. Kip is absolutely killing it with his vocals and the beautiful guitar solo is just transferring me to another dimension…And the lyrics – definitely nothing so special or distinctive about them, but still quite painful, emotional and quite relatable, as I’m sure many of us have been in a similar situation as the protagonist of this song. There’s also this unique orchestra aura that surrounds the song, achieved by the keyboard bits, which actually made me fall for this song so much!

“I wrote the riff and we jammed on it a little bit, and it was just one of those things that happened magically. You’ll talk to many people who think the best ideas happen by accident, and that was definitely one of them. A lot of times I’ll sit down and the s–t will just drop into my hands and I don’t even think about it. That was one of those songs,” Kip Winger said in an interview.

“Headed For A Heartbreak” LYRICS

Morning came and I was on my way
When you reminded me
I had too soon forgotten
It was you that set me free
Yeah, you were here when I came
You’ll be here when I’m gone
So don’t be waiting on love
‘Cause I’ll be waiting to ramble on

Darling, don’t wait up for me
Tonight I won’t be home
You’ve become a stranger
I just got to be alone
Don’t need nobody on my side
To dull the blade I’m on
So don’t be waiting on love
‘Cause I’ll be waiting to ramble on

It’s not a mistake
Don’t you think I can feel the pain?
I walk away, to live again…

Don’t you think I feel the pain?

“Headed for a Heartbreak” by Winger, retrieved from http://www.songfacts.com/detail.php?id=33963
“Headed for a Heartbreak” Lyrics, retrieved from http://www.azlyrics.com/lyrics/winger/headedforaheartbreak.html
P.S. I don’t own any audio or visual material used in this publication. All the rights and credits go to the owners and/publishers.
Cheers~
The publication expresses my personal opinion and in no way is trying to make a generalized statement. Please be kind and considerate when you read and/or comment.