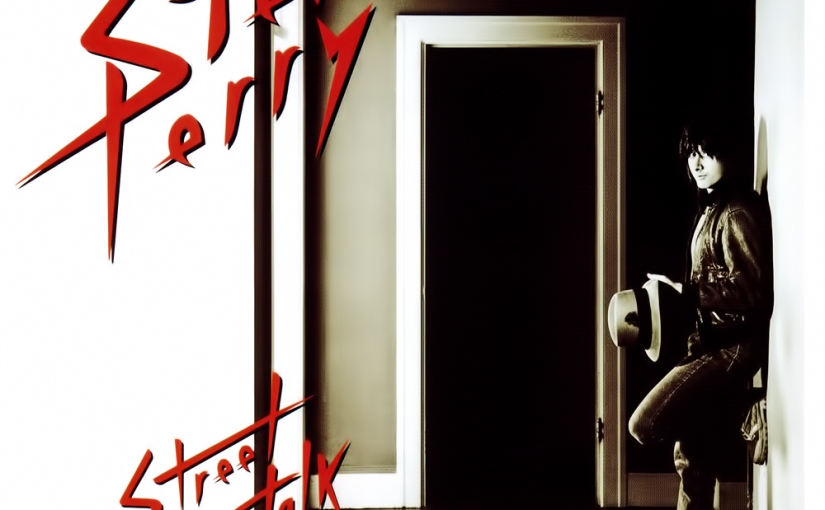 “Street Talk” by Steve Perry definitely falls under the category of “my favorite 80s rock albums”, therefore I am more than excited to be writing this overview. His first solo effort was definitely something quite different and much more pop-oriented than his previous works with Journey, however Steve’s voice is so soulful and magical that at one point you don’t really care about the music. Just like Jimi Jamison from Survivor sings on their album “Vital Signs” – “it’s the singer, not the song”.

Steve Perry hits hard right from the beginning – the second you hear those warm synthesizer chords, followed by the violins and him pouring his soul out with “You should’ve been gone, knowing how I made you feel”, you can’t but be hooked! The explosive R&B hurricane, titled “Oh Sherrie” is by far his greatest success – the track reached #3 on the Billboard Hot 100 and #1 on Billboard’s Rock chart. It highlights Steve’s vocal power like no other song, it’s catchy, lyrically-pleasing and on top of that there’s a personal story there – as we all know “Oh Sherrie” was written for his then-girlfriend Sherrie Swafford. The strength of the single somehow overshadowed the rest of the album, which in my personal opinion contains a lot of uplifting rockers and beautiful soulful tunes. For instance, the gentle “Foolish Heart” which peaked at #18 on the charts, perfectly represents the vocal and music quality of the album. My personal favorite “She’s Mine” is another romantic, mid-tempo rocker, featuring a lot of screaming soul from Steve and pleasing saxophone solos by Steve Douglas. “Strung Out” and “Running Alone” are too sugary and way too safe; however we do have Steve’s positively infectious vocals to compensate for the sweet pop mediocrity of those tracks. “You Should be Happy” is another personal treasure-track from the record – the lyrics are wonderful and there’s a special vibe coming out of this song, at least to me.

Obviously, Steve had a lot of fun writing, recording and producing this album. I could feel how important it was for him to do and try “his own thing”, separately from Journey. He literally put his heart and soul into the making of this album. We all know he can definitely hit a note or two, however with this album he also proved that The Voice himself can write timeless songs and produce quite respectably. Cheers to that!

“The kind of neuroses than you feel in Journey because of the pressure can tend to sterilize your work,” Perry said during an August 1984 interview with Kerrang!. With this album I just said ‘F— it, I got into this business to hear my own songs as they should be heard, to see the ideas take form, to build a track…that’s all. That’s what I’m gonna do with this record.”

“Street Talk” Official Wikipedia Page: https://en.wikipedia.org/wiki/Street_Talk
30 Years Ago: Steve Perry Releases ‘Street Talk’, retrieved from http://ultimateclassicrock.com/steve-perry-street-talk/?trackback=tsmclip
P.S. I don’t own any audio or visual material used in this publication. All the rights and credits go to the owners and/publishers.
The publication expresses my personal opinion and in no way is trying to make a generalized statement. Please be kind and considerate when you read and/or comment.
Cheers~