There are a number of essential classic rock albums from the ‘80s and then there’s Def Leppard’s “Hysteria” – the monstrous record that goes way beyond that! In addition to the brilliant technical and song-writing skills demonstrated on this album, “Hysteria” is significant due to the human stories that surround its production and release. Furthermore, till today it remains their best-selling and most successful album of all time! I don’t think something so extraordinary and out-of-this-world can actually be made nowadays. “Hysteria” is the perfect ‘80s rock album – catchy, fun, sexy and full of passion and timeless hard rock hits.

The creation of “Hysteria” took over three years due to a number of hardships the band had to go through. Rick Allen – their drummer, lost his arm in a car accident. Before this tragic event, Def Leppard were still riding on the train of success thanks to their phenomenal album “Pyromania”, released in 1983 – a record that proved that the band is here to stay and change the world! For a moment, though, their future didn’t seem as bright as they thought…What happened? Well, Def Leppard were the unquestionable kings of hard rock and such events couldn’t stop them from continuing their quest. Rick started using a custom-made electronic drum kit and not only became one of the greatest inspirations for so many people, but he became an even better drummer. Now, we call him the thunder God and he indeed is! Imagine the strength of his will and the degree of his passion. He is such a remarkable human being…

“Hysteria” is the last album to feature the outstanding guitarist Steve Clark, before his death. Some of his songs do appear on the following album – “Adrenalize” (1992), however Hysteria’s promotional tours and concerts were the last times we saw him on the stage with his bandmates, unfortunately. Losing their guitarist once again shook the band’s grounds but they rose from the ashes and kept on making great rock music!

“Hysteria” is produced by none-other than Mr Mutt Lange – the producer I adore and respect with all my heart and soul. His goal was to create an album that’s going to be the “rock version” of Michael Jackson’s “Thriller” – an album in which every track is a potential hit single! Well, he did it – “Hysteria” spawned 7 phenomenal hit singles I don’t even know how to describe. From the breathtaking power ballad “Love Bites” to the sexy and timeless guitar riffs of “Pour Some Sugar on Me”, “Hysteria” can just instantly settle down in your heart and never leave it.

Oh by the way, if you haven’t figured it out yet, YES – “HYSTERIA” it’s my favorite album of all time…

Let’s talk more about it and listen to some tunes! 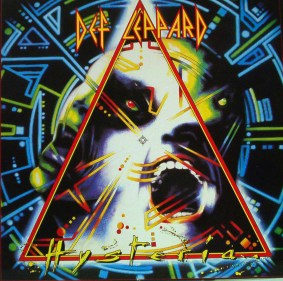 “We’ve always wanted to be a band for the people,” Phil Collen says. “When we started working on Hysteria we had just sold eight million records with Pyromania so we knew we had a fanbase. We weren’t necessarily trying to top that because you can’t go into something saying, ‘Okay, yeah, this one’s going to sell more than 8million copies.’ That’s a lot of records. We just wanted to make a record with good songs that we really liked and that were maybe a little more polished and more modern sounding. Even when we finished Hysteria we had no idea how it was going to do, but it felt like a triumph for us.”

“Pyromania” established a very high standard for what should be called a very well-produced and fine as hell hard rock album. In 1987, however, “Hysteria” raised the stakes even higher. Once again, Robert “Mutt” Lange was on board and his obsessive desire to create the perfect and most commercially successful hard rock album of all time, resulted in a painful squeezing of every tiny bit of talent and effort from the music engineers and technicians to the band members themselves. Undoubtedly, “Hysteria” was not an easy album to make – it took years, a lot of money and tons of planning.

Throughout the years, many critics have claimed that “Hysteria” is just a very well made pop sell-out product that doesn’t really possess any sort of artistic value or originality. If releasing seven hit singles from one album is not valuable and doesn’t speak for a band’s efforts and hard work then I don’t really know what else we should call “valuable and impressive”.

The brilliant consistency and marriage between pop and hard rock can easily be felt as we go from one song to another. To make the sound of “Hysteria” so unique and essential, Mutt Lange went above and beyond by using a variety of technology, vocal and sound layering and adopting numerous other effects to give the tracks a “stadium rock vibe” and “extra solid sound” that pierce your heart and gives you chills the moment you play them.

Def Leppard’s sense of craft was successfully portrayed in “Hysteria”. This pop-rock guilty pleasure record is filled with killer riffs, exquisite sonics, brilliant hooks and easy to sing along with lyrics. From the ultimate power ballad “Love Bites”, fueled with Joe Elliott’s gentle but rather extreme vocal delivery techniques to the timeless hard rock anthem “Pour Some Sugar on Me”, the album rocks song after song. Bottom line is, “Hysteria” will forever remain as one of the greatest pop-metal records ever. Not to mention that “Hysteria” completely revolutionized the industry at that time. No other rock record managed to impress with such polished production, album length and number of singles. The album and the band simply did the impossible with this album. They also paved the way and set a new and very high standard for all the rockers out there releasing albums.

My favorite thing about “Hysteria” is that there is just no weak song. Even the tracks that were not released as singles are equally impressive and important. The album is very consistent, easy to listen to, easy to sing along with and so exciting. We can just listen to it forever…

Now let’s listen to some music…

The most instantly recognizable rock tune of all times! Do I even need to introduce this song? Sexy, fun, spectacular and essential for every rock party! It hit number 2 on Billboard Hot 100 chart and is an epitome of ‘80s hard rock. The song sent sales of “Hysteria” so high that we can surely say that this song is one of the main factors behind the success of the album. The MV is also iconic and one of MTV’s most favorite and played one of all time!

Pour Some Sugar On Me

Love is like a bomb, baby, c’mon get it on
Livin’ like a lover with a radar phone
Lookin’ like a tramp, like a video vamp
Demolition woman, can I be your man?
Razzle ‘n’ a dazzle ‘n’ a flash a little light
Television lover, baby, go all night
Sometime, anytime, sugar me sweet
Little miss ah innocent sugar me…

Power ballads were the thing back in the ‘80s. It was essential for every rock musician to have such a song in their album. However, none other is as beautiful and captivating as “Love Bites”. Joe Elliott’s vocal delivery is what makes it so strong and effective. So far, “Love Bites” is Def Leppard’s only number one single on the Billboard Hot 100 chart. Following the huge success of “Pour Some Sugar on Me”, the explosion called “Love Bites” shot Def Leppard right to the stars!

When you make love, do you look in the mirror?
Who do you think of, does he look like me?
Do you tell lies and say that it’s forever?
Do you think twice, or just touch ‘n’ see?
Ooh babe ooh yeah

When you’re alone, do you let go?
Are you wild ‘n’ willin’ or is it just for show?
Ooh c’mon

This is my favorite songs from “Hysteria” and as a matter of fact I often point it out as my favorite Def Leppard song of all time. The reception of “Women” was not as good as Def Leppard might have expected and many believe it’s the least interesting song from “Hysteria” but I can never agree with such statements. The intro, heavy bass and lyrics hit so hard that I can’t even explain it. Just listen and tell me how come this awesome track flopped?

In the beginning
God made the land
Then He made the water and creatures, then He made man

He was born with a passion, love and hate
A restless spirit with a need for a mate
But there was somethin’ that was missin’, somethin’ lost
So he came with the answer, here’s what it cost

One part love, one part wild
One part lady, one part child
I give you…

Some other memorable tunes from the album…

“Hysteria” is THE album of the ‘80s! It has everything I ever wanted from an album and there’s a reason why it’s my favorite one of all time! Every song is a piece of art, fueled with so many emotions. You can actually feel their immense passion, devotion and determination as u go from one track to another. This album meant a lot to them and they poured out their souls in it. Most importantly, “Hysteria” is the perfect combination of music technology, outstanding craftsmanship and the strength of human will and ambition. The greatest records are not the ones who sound good but the ones that allow you to hear the people inside of them. I can never have a more favorite album than this one…

P.S. I don’t own any audio or visual material used in this publication. All the rights and credits go to the owners and/publishers.
Cheers~