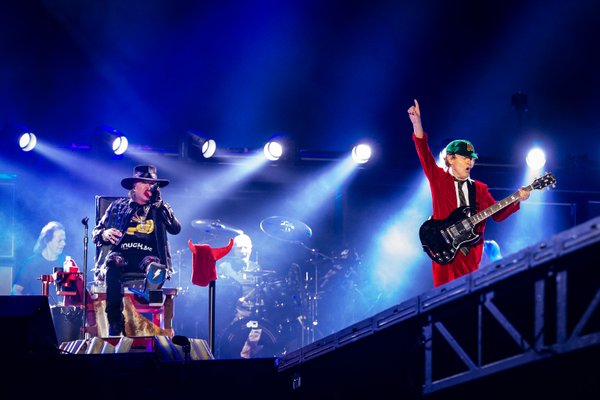 On May 7th, Axl Rose had his first live performance alongside his new bandmates of AC/DC during their concert at Lisbon, Portugal. The concert marked the beginning of a series of European dates which are scheduled into next month.

Rose replaced Brian Johnson, after the long-time frontman was advised not to perform live events due to his serious hearing issues.

The band began their set with “Rock or Burst” and continued with some of AC/DC’s ultimate hits like “Back in Black”, “Thunderstruck” and many more.

“Rock or Bust”
“Shoot to Thrill”
“Hell Ain’t a Bad Place to Be”
“Back in Black”
“Got Some Rock & Roll Thunder”
“Dirty Deeds Done Dirt Cheap”
“Rock ‘n’ Roll Damnation”
“Thunderstruck”
“High Voltage”
“Rock ‘n’ Roll Train”
“Hells Bells”
“Given the Dog a Bone”
“Sin City”
“You Shook Me All Night Long”
“Shot Down in Flames”
“Have a Drink on Me”
“T.N.T.”
“Whole Lotta Rosie”
“Let There Be Rock”
Encore:
“Highway to Hell”
“Riff Raff”
“For Those About to Rock (We Salute You)”

Watch the videos below:

You Shook Me All Night Long

AC/DC posted a video on their official Facebook page, featuring Lisbon fans talking about their experience. Watch below: