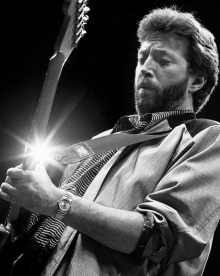 Today we celebrate the 71st birthday of none other than Mr Eric Clapton – one of the most brilliant rock musicians in the world and one of my personal favorite rockstars of all time. He is such an inspirational figure and I don’t know any other musician that possesses so much talent, passion and devotion to music. Despite being 71 years old, he keeps on making music and touching the souls of millions of people around the world. Clapton is very special to me as I grew up listening to songs such as “Wonderful Tonight” and “Let It Rain”. In the spirit of his birthday, I decided to make a little publication, in appreciation of the limitless talent of this guitar God! I hope you guys would enjoy it and remind yourself of some of his most remarkable tunes throughout the years.

Eric Clapton was born on the 30th of March 1945 in Ripley, Surrey, England. His early career is associated with the infamous blues-oriented rock band – The Yardbirds. He stayed with them from 1963 till 1965. During that time, Clapton developed his own signature style and quickly became one of the most talked-about guitarists in the British music scene.

The Yardbirds’ manager, Giorgio Gomelsky, was actually the one who gave Eric Clapton his famous nickname “Slowhand” in early 1964.

In Clapton – The Autobiography (2007), Eric said, “On my guitar I used light-gauge guitar strings, with a very thin first string, which made it easier to bend the notes, and it was not uncommon during the most frenetic bits of playing for me to break at least one string. During the pause while I was changing my string, the frenzied audience would often break into a slow handclap, inspiring Giorgio to dream up the nickname of ‘Slowhand’ Clapton.”

The following year, Clapton undertook numerous projects with bands, such as John Mayall & the Bluesbreakers and the Glands. By 1966 – the time he formed his new band Cream, Clapton was already a well-established and extremely influential guitar player. Everyone was captivated by his talent and wanted to hear more and more…
The years he spent with Cream helped him reach his full song writing potential, which grabbed the attention of the American audience – something that was not achieved before that. Despite the Cream’s commercial success in both USA and Europe, the band had a relatively short life due to conflicts between the members and alcohol abuse. Nevertheless, they are still considered as one of the most influential rock bands of the era. Songs such as “Sunshine of Your Love” and “Crossroads” keep on living and reminding us of their musical virtuosity. 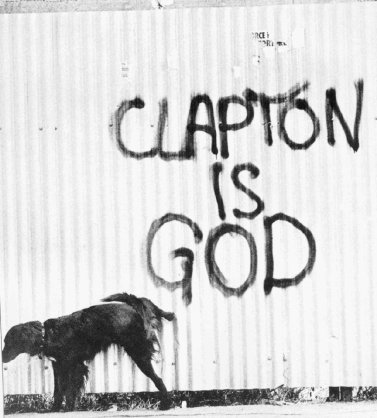 During the autumn of 1967, an admirer of Clapton spray-painted the famous slogan “Clapton is God” on an Islington Underground station. There a very famous photograph of this wall, capturing a dog that pees on the same wall…

Eric Clapton’s next musical project was the supergroup Blind Faith (1969). In addition to being a member of Blind Faith, he was also participating in various other acts in bands such as Delaney and Bonnie and Friends, the Plastic Ono Band, playing lead guitar in some of Lennon’s songs and many others. He was probably the busiest guitarist at that time. In 1970, he finally released his first self-titled album, including masterpieces such as “Let it Rain”, “After Midnight” and “Blues Power”.

Originally called “Eric Clapton and Friends”, his next band – “Derek and the Dominos” was the first step towards a decade full of love and turbulence, mixed with rehab and immense commercial success. His deep infatuation for George Harrison’s wife Pattie Boyd inspired the band’s first and only album “Layla and Other Assorted Love Songs” (1970) and gave birth to one of Clapton’s most famous and loved tunes of all time – “Layla”.

ERIC CLAPTON IN THE 80S~

The beginning of the 90s was very emotional for Clapton, as he lost his four-year old son. His sadness was channeled into the song “Tears in Heaven” for which he received six Grammy awards.

Since then, Clapton has released 11 studio albums and we are waiting for his 12th one which is going to be released on May 20th this year. Personally, among all the albums he made throughout the years, an honorable mention should receive “Riding with the King” (2000), “Me and Mr. Johnson” (a tribute to the legendary bluesman Robert Johnson, 2004), “Back Home” (2005), “Clapton” (2010) and “Old Sock” (2013). If you are a fan of Clapton, those albums are a must! 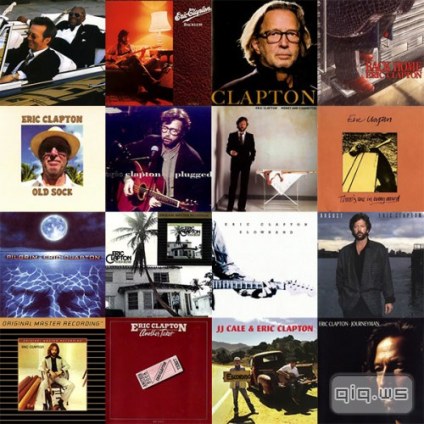 Needless to say, Eric Clapton is a true legend – one of the most respected and appreciated guitarists and music-writers of all time. People love him for what he is – a talented and passionate musicians and a true role model. Throughout his life, he had to fight with alcohol and drug abuse, see the death of his son and go through so many other personal and professional challenges. However, his love for music was always there to bring happiness, joy – a little bit of every feeling possible to the people all over the world. His spirit is unbreakable and his career is unstoppable. Thank you, Eric for all the songs and emotions you brought to this world. I hope you never stop making music! We love you…

P.S. I don’t own any audio or visual material used in this publication. All the rights and credits go to the owners and/or publishers.