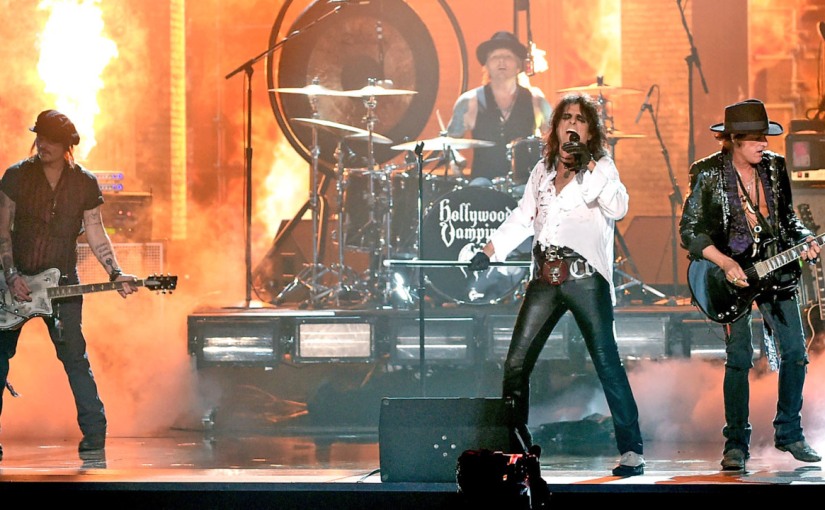 This right here – this is what I’m talking about! Pure, solid and captivating rock and roll energy that cannot be described, it must be felt!

The Alice Cooper-fronted supergroup – Hollywood Vampires literally blew up the stage during their Grammy performance last night. This year’s ceremony marked the television debut of the band, consisting of members Alice Cooper, Johny Depp, Joe Perry, Duff McKagan and Matt Sorum. The performance begun with their original song “As Bad As I am” and moved on with Motorhead’s “Ace of Spades” – a very special tribute to the late Lemmy Kilmister, who died on the 28th of December last year. They performed the song in front of a bass rig with Lemmy’s trademark cowboy hat, bass and high microphone stand.

The band was welcomed on the stage by Dave Grohl, who also said a few personal and rather touching words in homage to Lemmy. “Many of us play rock and roll but few among us are rock and roll,” Grohl said. “He was Motorhead; he was a legend – and I was proud to call him my friend. I have an Ace of Spades tattoo, but the truth is Lemmy and Motorhead left their mark on me a long time ago.”

Performances like this one and rockstars like those guys are the ones that truly deserve to be awarded with a Grammy. I don’t want to impose my views on anyone, however this is what rock ‘n’ roll is and I don’t really understand why the Grammy’s stopped caring about rock music… (Yes, I am dissatisfied with this year’s winners in the rock music categories.)

Check out the explosive performance below and tell me what you think about it. I felt so emotional and proud – they were excellent! To me personally, this performance was indeed the most terrific and most memorable one from this year’s Grammy awards (and probably in general in any Grammy ceremony ever). I am so glad we were able to witness such greatness – even just through the internet. Thank you!

P.S. I do not own any audio or visual material used in this publication. All the credits go to the owners or publishers. Cheers.