Today we celebrate the 54th birthday of non-other than Axl Rose! There’s no self-respecting rock music fan who doesn’t know who Axl Rose is! However, for the record I still need to say that he is the charismatic and eccentric frontman of Guns N’ Roses and one of the most controversial rockstars of all time! Since today is his birthday, I decided to prepare a little appreciation publication that will acknowledge and present a few of my favorite photos of him, as well look through some of his best works as a musician throughout the years. Furthermore, since Guns N’ Roses recently announced a long-awaited comeback with tour dates this year, it seems like to me this is the perfect time to talk about Mr. Rose. 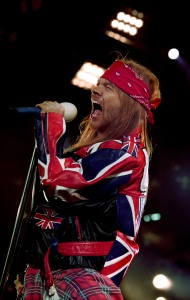 Before forming the infamous rock band Guns N’ Roses, Axl Rose was a member of other rock bands such as L.A. Guns and Rapidfire and was making a name for himself in the rock music scene. However, his major recognition and success came with GNR, of course. The band quickly gained an enormous fan base and grabbed the attention of so many people all around the world. Their commercial peak was reached with “Appetite for Destruction” which later on becomes the best-selling debut album of all time! That surely speaks volumes! Undoubtedly, one of the reasons why this album became such a major accomplishment is Axl Rose’s vocal delivery – it was most certainly not the conventional male rock star voice – it was something that people back then never really had the chance to hear before. His raw and high vocals were also accompanied by his bizarre, erratic and even crazy personality. This combination made all the girls crazy about him. He was indeed a quite handsome fellow…
Let’s watch some of the videos from the album…I mean just look at him, do I even need to say more?

After becoming this huge rock sensation, the band started recording a new album and embarked on a long tour, which became a huge success, of course. The tour itself may have been a financial win, but Axl Rose had his numerous moments of irrationality and being all late-arriving, canceling-at-the-last-minute, super-famous ego-driven rockstar and all. He had his moments in many of the band’s live concerts. I’m not going to go into details about the things he did because I believe he was quite young and people do make mistakes… I think fans forgave him a long time ago – after all he is Axl Rose and we still love him!

The problems within the members of the band were too large and too many to overcome which was very unfortunate for all the fans hoping to see them work together on more projects. Nevertheless, Axl Rose committed himself to a new album – “Chinese Democracy” which was released in 2008 as the band’s sixth studio album after “The Spaghetti Incident?” (1993). The album was long-awaited and it did have a major success and positive critical reviews, however it was nothing compared to what things used to be. Working alone without the original members of the band, Axl Rose crafted a very different, electric driven album which was most certainly not the same as the well-known previous hard rock sound we were used to.

Finally, I would like to finish by saying that Axl Rose is a true rockstar and indeed a voice of a generation that continues to spark and trigger our interest and admiration with pretty much everything he does on and off stage. I respect him for his success and greatness back in the 80s and 90s and wish to go back in time and see the band performing live – his stage persona is very intriguing to me and I’m sure I would’ve had so much fun. For what he did, the way he performed and his musical talents as a whole, he did receive numerous awards and recognitions, such as Rock and Roll Hall of Fame induction, Ronnie James Dio lifetime achievement award and you know…selling more than 30 million copies of a single album worldwide…

Happy Birthday, Mr. Axl Rose – the rockstar that changed the game and put a new meaning into the word “controversial”!
P.S We, the fans, cannot wait for the comeback of the band this year! I’m sure it’s going to be something amazing! Please, don’t come late or forget to show up, otherwise… fans might start rioting again…and we don’t want history to repeat itself now, do we…?

oh I love this so much….

p.s I do not own any photo or video material that was used for this publication. All the credit goes to the photographers and the uploaders!