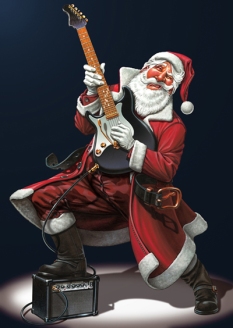 Christmas is coming soon, so it was only natural do dedicate a publication to some of the most classic Christmas rock songs. I love Christmas and I’m sure pretty much everyone else in this world does –but what is Christmas without music? The spirit of the holidays is perfectly captured in the following songs I would present to you. In terms of lyrics, vocal and instrumental deliveries I have chosen five songs that I believe are the best Christmas rock songs! Of course, this is just my personal opinion and I don’t want to make any claims, however those five songs are going to be played on my Christmas days for sure! Also, I would like to say that in my opinion, the bands nowadays are not really investing much of their time or resources into creating memorable Christmas songs. I honestly wish I could include some new and more recent Christmas songs, however somehow I can’t think of any – they are just too forgettable and meaningless compared to the classic songs from 30-40 years ago. So once again, I will dive into the past to dig up some of those great and memorable Christmas songs and I hope you’d enjoy them as much as I do. With no further due, here they are… 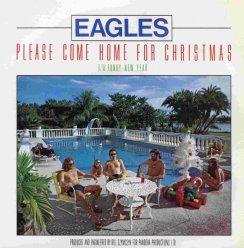 This is probably one of the most famous Christmas classic songs ever! It was first released back in 1960 by American blues singer Charles Brown. Then, later in 1978, Eagles covered and released the song during the holiday season. The song has very beautiful lyrics which of course are related with Christmas, Christmas traditions and spending the season with the people you love. I should say that I respect and admire Charles Brown with all my heart but I decided to include Eagles’ cover instead simply because the first time I heard this song was their version so it somehow connects more with me. The song was also covered by Bon Jovi and included in his Christmas album in 1992. However, I prefer the Eagles version – it somehow creates a much warmer and cozy atmosphere – you just want to grab a cup of hot choco and sit down next to the fireplace with the song on the background.
But this is Christmas, Christmas my dear
The time of year to be with the ones you love
So won’t you tell me you’ll never more roam
Christmas and New Year’s will find you home

Then we have this brilliant song by Queen… It’s no cover this time – the song was written by lead guitarist Brian May and drummer Roger Taylor. It was released back in 1984. The song has no official music video and that’s probably one of the reasons why not so many people are familiar with this Christmas classic rock song. However, to me it is one of the best ever! Freddie’s voice fits just perfectly! What I mostly adore about this song (besides the brilliant vocals of Freddie) are the lyrics. To me they create the perfect atmosphere and are so easy to sing with… There’s some kind of sadness however, at least to me… But still I have to say it is one of my most favorite songs about Christmas…
The moon and stars seem awful cold and bright
Let’s hope the snow will make this Christmas right
My friend the world will share this special night
Because it’s Christmas
Yes it’s Christmas
Thank God it’s Christmas
For one night 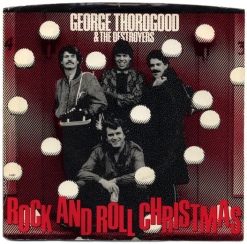 We have another oldie – this song was released back in 1981 – can you imagine? I’m including it in my list because it is just so uplifting and so spirited. Of course, I don’t think people nowadays would enjoy listening to such music during their Christmas celebrations. The song itself carries the spirit of a long-gone time. It’s very blues and piano oriented song and I love it. It’s a song to dance to and even do the twist to! It heavily reminds me of the 60s and the Chuck Berry/Elvis sound that’s actually the whole idea of the song. Just enjoy the funny video and have a rock and roll Christmas!
Let’s have a rock and roll Christmas,
Just like we used to know
Yeah, a rock and roll Christmas,
And I’ll meet you by the mistletoe
We’ll rock around the tree,
Go Santa, go, go, go
I want a Chuck Berry record, and a picture of Elvis too
A pair of ice skates for my baby, Peggy Sue
Yeah, and a phonograph player so I can rock and roll with you

I love love love this Christmas song. It was released back in 2000 which make it the newest favorite Christmas rock song on the list. I wasn’t sure whether I should include it or not since I’m talking about classics here, but it was released 15 years ago so i decided that it’s perfectly fine…In addition to the song title, Christmas Time Again is also the name of the seventh studio album of Lynyrd Skynyrd which was released during the holiday season. I want to include each and every Christmas song from the album; however I will go with just this one for now. I deeply recommend you guys listen to the entire album because it is that good! It is to me one of the most well-crafted Christmas albums ever! The vocals are beyond perfect and the atmosphere that the song creates is so sweet and loving! The lyrics are also brilliant!
Well, its in your eyes and in your smile it shows
That this very special time of year
It seems to set your heart a glow
Oh, sing it with me, baby
Oh, its Christmas, you know its Christmas
And its our favorite time of year
Bells will be ringin, our hearts are singin
Well, Im glad its Christmas time once again 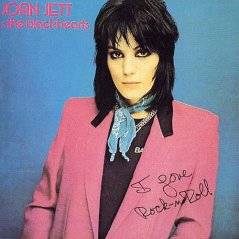 So, this is it for now – a small part of my most favorite Christmas rock songs! Some of them are covers of other famous Christmas carols but I included the versions I like the most! I’m planning on making a publication about newer artists and their contribution to the Christmas song fever! Stay tuned for more! Happy Holidays!