Some people say that the era of the CDs is long gone. However believe it or not, there are people like me out there who still purchase and collect CDs. I have this little CD shop near the place I live (I have to take a picture next time) and I just love spending hours and hours there. They have these huge wooden shelves with tons and tons of CDs and even vinyl records. The whole atmosphere just screams my name!
Anyhow, a few days ago I went there to look for some albums and spend some quality “me” time. After hours of literally checking every single album on the shelves and a huge struggle not to buy all the albums I saw, I ended up buying the debut album of one of my most favorite rock bands – Rainbow. The title of the album is “Ritchie Blackmore’s Rainbow” and it was released on the 4th of August, 1975. Can you believe this? It has been 40 years since this album hit the shelves. It turned out I bought it on its 40th year anniversary – such a pleasant coincidence. Originally I was hoping to come across and buy their “The Very Best of Rainbow” album that came out in 1997, however I couldn’t find it (still not giving up, though). Then, the lady from the CD shop was kind enough to find me the debut album from the storage. The album itself was imported from the USA and of course, it’s a remaster. I just had to buy it – it is such a rare precious and a must for every Rainbow or Ritchie Blackmore or Ronnie James Dio fan. In the following post I would briefly present the album and its songs. This is not a band profile publication, so I would like to focus on the album itself, rather than the members. I decided to dedicate my first publication to this debut album because it is the most recent CD I purchased and because it is the debut of my blog 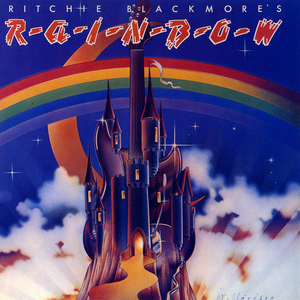 Tracklist:
1.Man on the Silver Mountain
2.Self Portrait
3.Black Sheep of the Family
4.Catch the Rainbow
5.Snake Charmer
6.Temple of the King
7.If You Don’t Like Rock n’ Roll
8.Sixteenth Century Greensleeves
9.Still I’m Sad (The Yardbirds cover)

Firstly, I would like to start with the album cover. It was made by American fine artist David Willardson. Honestly speaking, I am not such a huge fan of cartoon-style album covers. Realistic album covers (photographs) or simplistic designs have always been more striking to me. On the cover we see a castle which also happens to be a guitar and there’s a rainbow behind it. It is very colorful and too Disney-like I would say. It’s only natural since the artist worked for Disney at that time, but still…The trend of putting unique and rather strange, surrealistic art on an album cover was very strong at that time – especially the second part of the 70s. For instance artists such as Roger Dean and Storm Thorgerson were extremely popular with bands like Pink Floyd, YES and Asia. Back to Rainbow’s cover, I do really like it – why? – because it is very distinctive and easy to remember. Also, there’s something very magical and mysterious in the painting itself – I just want to enter into the rock castle and never go out…
Real-life picture of the album cover ~ That’s how it looks; Very distinctive, right?

Secondly, I would like to talk more about the songs from the album. I am not going to comment on each and every song; rather than that I will focus on the overall picture, as well as on two songs in particular – my favorite songs from the album.
Bottom line is, if you like the combination of hard rock and poetic, fantasy-oriented lyrics – this is the album for you. Most of the songs are a bit gloomy in terms of lyrics, except “If You Don’t Like Rock ‘N’ Roll” which is very upbeat and in my opinion is the perfect 60s rock’n’roll nostalgia song! In terms of vocal and guitar delivery I would say that the album is rather simplistic, not as progressive and innovative as some people would like it to be. However, to me that is exactly why the album is so good! Ritchie’s riffs are not as complicated and aggressive as they used to be back when he was with DP and that is the beauty of it! Ronnie, on the other hand is just perfect – in my book of the greatest male rock vocals of all time, he is definitely in top 10. I don’t think anyone can sing those highs the way he does – just play “Black Sheep Of The Family” or “Sixteenth Century Greensleeves” and you will see what am I talking about!

The two songs I wanted to talk about are “Man On The Silver Mountain” and “Catch The Rainbow”, which in my opinion are the best songs of the album.

One of the most memorable song intros ever (at least to me)! Ronnie said that it’s “a semi-religious song, the man on the silver mountain is a kind of God figure everyone is crying out to.” – rather interesting right? It was co-written by Dio and Blackmore. When Ronnie died in 2010, the words “The man on the silver mountain Ronnie James Dio” were put on his grave. The song is a classic and it defines an era – I don’t have to say more. It’s memorable, catchy and very powerful – the greatest thing is that it delivers that power to the listeners. Ronnie’s vocals are beyond perfect! Personally, my favorite part of the song, as well as lyrics is when Ronnie sings :
“Come down with fire
Lift my spirit higher
Someone’s screaming my name
Come and make me holy again” ….and then we hear the memorable guitar riff! ❤

“Catch The Rainbow” is probably the gloomiest song from the album. However, I don’t think it is that type of song that brings out sad emotions and feelings (at least to me). The song itself was not released as a single, however it remains one of their most famous works. The song is loved that much probably because it is often connected with  “Little Wing” by “The Jimmy Hendrix Experience”. To me personally, its strongest point is the simplistic yet powerful guitar riff and the background choirs that create a very mysterious and a bit psychedelic vibe. Lyrically speaking, the song is very poetic and beautiful. I especially love the chorus:
“We believed we’d catch the rainbow
Ride the wind to the sun
Sail away on ships of wonder”

A real life picture of the CD with the tracklist and the covers of each and every song on the right part of the case. Very well-packaged, indeed! 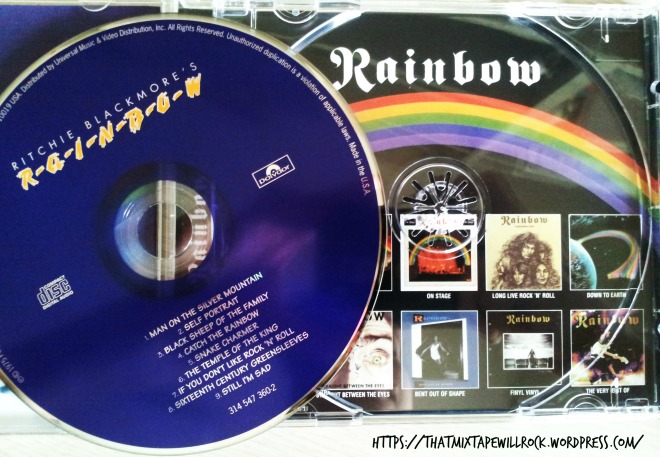 Finally, I just want to say that to me, this is one of the most expected and successful debut albums of all time. Ritchie and Ronnie are an amazing team and I wish Ronnie was still with us to continue working together… I am very glad I bought the album and I would recommend it to everyone who enjoy rock music from the 70s. The album possesses an essence…a special and unique atmosphere which is no longer present in today’s music; not to mention quality songwriting and brilliant musicianship… Catch the rainbow!

Me, enjoying the newest addition to my CD collection! 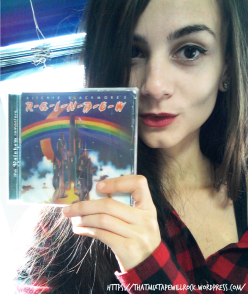